The Gaslighting Bloviator And The War On Reality 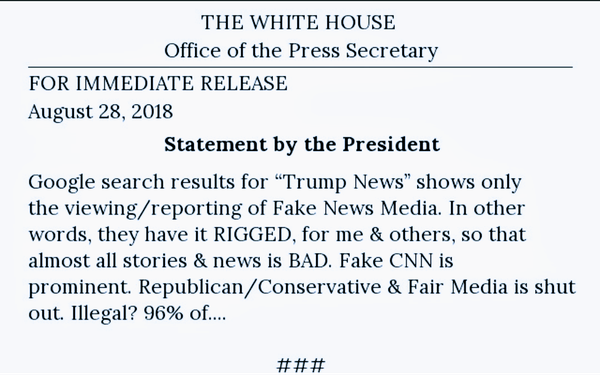 Trump began his presidency by declaring war on the media. He escalated it to a war on truth. Now he’s launching an attack on reality. By going after Google’s search algorithm this week, he fails to understand how search queries work, and the fact that it is a reflection of his own personal search history. He might as well declare a war on mirrors, because what he sees reflecting back at him is, in his own words, “BAD” and “fake.”

What is scary about Trump’s campaign against reality, is that he actually has the power to reshape it. And by that, I don’t just mean his power to influence how his followers perceive the world through his oration or tweets, but by using the power of his office to create policies that have indirect effects.

It’s one thing for Trump to repeat a popular right-wing conspiracy theory that “Google and others are suppressing voices of Conservatives and hiding information and news that is good. They are controlling what we can & cannot see.” That’s inciting enough. What’s really dangerous is what he said next: “This is a very serious situation -- will be addressed!”

The threat to investigate and report on Google’s search algorithm comes just weeks after Trump accused Twitter of “SHADOW BANNING” prominent Republicans -- something Twitter chief Jack Dorsey denied, but something that has been another popular conspiracy theory in right-wing circles.

“We’re just going to do some investigations and analysis. That’s what we do,” he continued.

While that in itself could have a chilling effect on the neutrality of digital platforms, potential actions could have the equivalent effect of gerrymandering the media information that Americans get.

Trump is not alone. He’s had a powerful ally in Rupert Murdoch, whose Fox News Channel has perpetuated the conspiracy theories, and his New York Post, which published an editorial Tuesday headlined “We should all be worried about Google’s power.”

Anyone who understands the way Google’s search algos work understands that for better or worse, it’s about the relevance of the individual user’s experience, not about the partisanship of third parties. Yes, there are “organic” ways for third parties to game it, but that requires expertise and work. And of course, there are ways to buy your way into Google’s search results, but you literally have to pay for those placements.

In other words, if Trump and/or right-wing conspiracists were serious about influencing Google’s news results, they would be better off doing what consumer marketers do: hire a good SEO and SEM agency to help.

If anything, Google, Twitter, Facebook and the ilk are more like the Borg than politically partisan information purveyors. And if they are guilty of violating any neutrality, it is that they tend to tweak their algos in ways that achieve optimum outcomes for themselves: First by optimizing their UX, and second by optimizing the revenues they derive from it.

What I find most ironic about Trump’s recent attacks on the neutrality of digital platforms is that he and his campaign were masters of gaming them in several ways, some of which may have been illicit or illegal, particularly Cambridge Analytica’s -- which was chaired by Trump campaign manager and advisor Steve Bannon -- misappropriation of Facebook user data, and its dissemination of actual fake news to influence the reality of those users and their friends.

We may never know the extent to which Russia collaborated on Trump’s war on reality, but we do know that they continue to employ active measures to sow disinformation and discord among Americans.

We may never know the full extent that Trump’s media allies -- Murdoch’s Fox News and papers, Sinclair Broadcasting’s local broadcast news outlets, or even Trump’s own direct-to-consumer “Real News” channel on YouTube, contribute to that war, but the reality is that when Trump looks at the results of his Google news queries, he is looking at a reflection of himself. And he apparently does not like what he sees reflecting back at him. 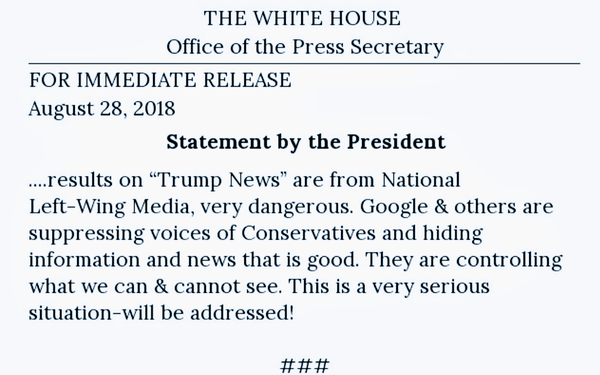 https://t.co/TUFIWR3Cf4 It has been suggested to me that everyone who sees this picture should run this query just once to tally votes. That would fun. But just one vote per person so the result will be TRUTH! #PoliticalCartoon#Gaslighting#TrumpGoogleSearches#TrumpGooglepic.twitter.com/N9dIIo0jRQ