Nissan Is 'Calling All Heismans' For Eighth Year 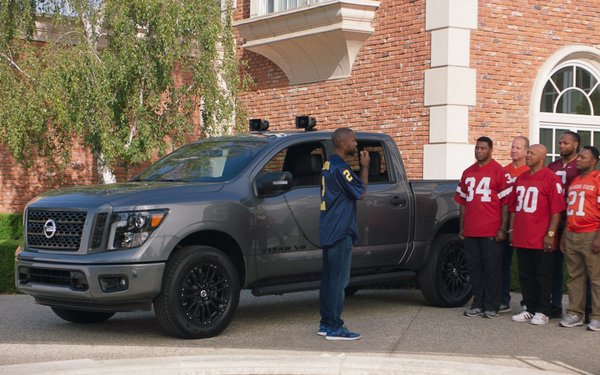 Just in time for the start of the college football season, Nissan is breaking its annual Heisman Trophy-related campaign.

It debuts Aug. 30 on ESPN during the college football season opener, Purdue vs. Northwestern.

The Nissan Heisman House is a fictional fraternity that provides fans a glimpse of what it might be like if the winners of college football's highest individual honor lived together under one roof.

Nissan credits agency TBWA\Chiat\Day for coming up with the concept after hearing 2009 Heisman winner Mark Ingram refer to the group of winners as a fraternity during an awards ceremony speech.

TBWA has worked on the campaign every year, says Erich Marx, director, marketing strategy and content, Nissan model line, at Nissan's U.S. sales and marketing organization. ESPN is the lead for production.

“We think it is a perfect fit for our brand,” Marx tells Marketing Daily. “We talk all the time about how we're a car company with high-tech innovative products. We look at things a different way and we're always looking for an angle in our advertising to bring excitement, joy, engagement to our fans, our consumers and shoppers. And what's more exciting than college football?”

The research repeatedly shows that the campaign, which is an overall brand campaign first and a vehicle model campaign second, has tremendous reach.

“Overall, the lift we get, the engagement we get, the enthusiasm and feedback we get from college football fans and just consumers in general, exceeds virtually everything else we do,” Marx says. “It is absolutely the pinnacle for us from a brand-lift standpoint.”

While past years’ efforts have featured numerous Nissan vehicles, this year’s focus is on Nissan Intelligent Mobility and the Titan pickup, although there will be appearances by the all-new Altima, all-new Kicks and Rogue.

“The core content of the campaign has always been the TV commercials that run in very high-profile ESPN media weight,” Marx says. “But having said that, with the growth of social media, we really have then tried every year to figure out what is the secret sauce to having fans not only engage with us, but share with each other their enthusiasm, to almost act as recruiters for the Heisman House campaign amongst themselves.”

New this season will be a series of animated GIFs of each Heisman winner for fans to share socially and via text. The GIFS for each player are likely to appeal to not just their college fanbase, but also their past or present NFL affiliation. For example, the Baker Mayfield GIF is likely to be shared by Oklahoma University fans, as well as Cleveland Browns fans.

“It’s just a second bite of the apple for us to add reach to this campaign,” Marx says.

For the 12th straight year, Nissan will provide college football fans the opportunity to vote for their favorite Heisman Trophy candidates. Nissan fans have accurately predicted the winner 10 of past 11 years

Nissan also announced two sweepstakes, including one that offers a chance for a member of the public to win two tickets to attend the exclusive Heisman Trophy Award Ceremony in New York on Dec. 8.

Fans also can enter to win a customized Nissan Titan. Last year nearly 1 million consumers used the configurator on NissanUSA.com to customize a Titan in their favorite school colors.

As in previous years, the Nissan Heisman House Tour, featuring a simulated Heisman House, will travel to different college campuses throughout the U.S. The tour's first stop will be Sept. 1 in South Bend, Ind., for the Michigan vs. Notre Dame matchup.