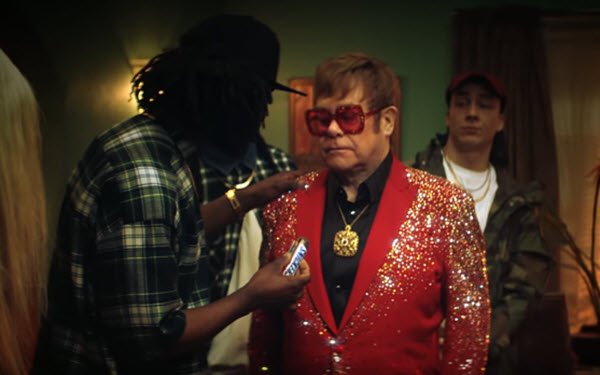 Snickers is making its first musical play for cross-generational appeal by pairing Sir Elton John and popular rappers for the brand’s latest "You’re Not You When You’re Hungry” TV and online ad.

The ad (60-second version below), from the U.K.’s AMV BBDO,  is set at a house party during a rap battle.

Following raps by British hip hop artists Emarr Kuhomano and Monique Lawes, John — or someone who looks and sounds just like him — breaks the mood by crooning the decidedly non-hip hop 1976 John/Kiki Dee hit “Don’t Go Breakin’ My Heart.”

The ad, which also has a 30-second version, will debut on U.S. television next week and will also air in the U.K., Germany and Russia.

But the new ad also leverages the power of music.

“We’re always looking to reach the broadest swath of the population, but we can’t ignore the growth of the millennial and Gen Z audiences, and we recognize the role that music plays in their lives,” Dale Green, global brand director for Snickers, told Variety.

“Elton holds the title of Billboard’s No. 1 male artist of all time and is one of the most prolific and successful singer-songwriters of his generation. In pairing Elton and his 50-plus years of multi-genre hits with Boogie, a hip-hop artist on the brink of stardom in today’s most popular category, we can connect with our audiences over a shared love of music.”

John, for his part, stated that he did the Snickers spot because of his advocacy of hop-hop music, the chance to hang out with the hip hop artists, and his appreciation of how the new Snickers ads “have humorously portrayed being off your game when you’re hungry, but in a way that’s current and relevant to young people.”