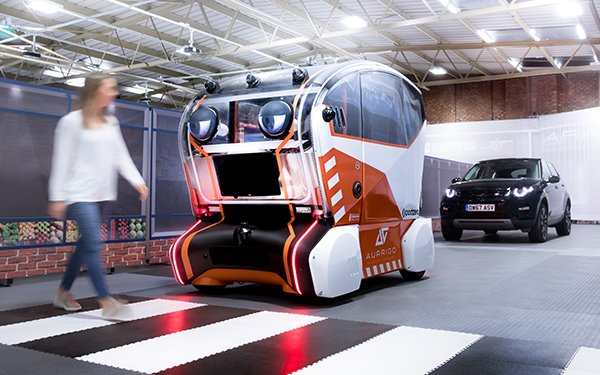 Self-driving vehicles are supposed to "see" pedestrians, but that doesn’t mean pedestrians seeing the vehicles know they have been seen.

To start researching the autonomous vehicle-pedestrian connection, Jaguar Land Rover has outfitted a pair of "virtual eyes" to intelligent, moving pods to learn how humans will come to trust self-driving vehicles.

The eye pods are friendly-looking and seek out a pedestrian, appearing to look directly at them. The idea is that the pods are signaling to the pedestrian that they are aware of the person’s presence, since studies have shown that the majority of pedestrians worry about how safe it will be to cross the road in a self-driving car future.

The intelligent pods, running autonomously on a fabricated street scene in the U.K., are part of an engineering project in which Jaguar Land Rover enlisted the help of cognitive psychologists to better understand how vehicle behavior affects human confidence in new tech, according to the automaker.

During an interaction, trust levels in the person before and after the pod makes eye contact are measured to determine how confident humans feel that the vehicle would stop for them.

“It’s second-nature to glance at the driver of the approaching vehicle before stepping into the road,” stated Pete Bennett, future mobility research manager at Jaguar Land Rover.  “Understanding how this translates in tomorrow’s more automated world is important.”

The testing is part of a wider study looking at how future autonomous vehicles can replicate human behavior and reactions when driving. To date, the study has involved more than 500 test subjects interacting with the self-driving pods.

The research is part of Jaguar Land Rover’s involvement in the U.K. Autodrive project.

A video of the pod with eyes shows how it makes eye contact with a pedestrian, then stops to let the pedestrian cross. During that time, the eyes appear to follow the pedestrian across the path.

Until then, the testing continues.