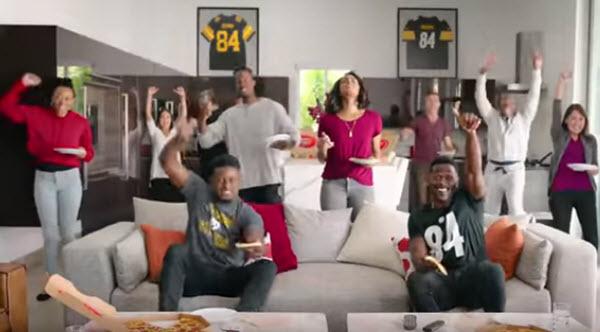 Pizza Hut is pushing hard to make the most of its first season as the official pizza sponsor of the National Football League.

Papa John’s intercepted the sponsorship ball back in February, after Papa John’s prematurely ended its multiyear deal with the NFL in the wake of the controversies around Papa John’s founder John Schnatter.

The ads, also being run online, promote a special $7.99 deal on two large pizzas, amid scenes of the players watching games with their family and friends and displaying their dancing style (below). Local events, player partnerships and social media efforts will also be rolled out during the season.

Pizza Hut is also introducing a new “Game Plan” platform within its Hut Rewards program, offering special deals, kickoff reminders and weekly drawings for a variety of football-themed and other prizes, including a grand prize of a trip to Super Bowl LIII.

Hut Rewards members who enroll in Game Plan, including indicating their favorite team, are automatically entered for the weekly drawings, and can earn additional entries with orders placed through their rewards account.

In addition, during the season, the pizza chain’s boxes will feature all 32 NFL team logos — and, in conjunction with a free app, enable consumers to use their smartphones to play a virtual, AR version of a cornhole beanbag-tossing game.

In contrast to Papa John’s, which has been suffering declining sales since fourth-quarter 2017, after the Schnatter controversies first broke out, Pizza Hut’s same-store sales rose in that quarter and in first-quarter 2018. However, they declined by 1% in Q2, disappointing analysts, who had projected a 1.2% increase.