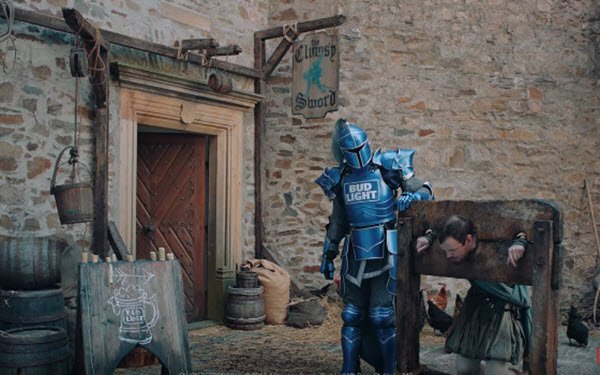 One of the latest in the prolific series is “Bud Lights for Everyone,” in which one patron of a medieval pub brings the king’s punishment on himself (above) by irritatingly requesting “autumnal mead” instead of the Bud Lights favored by the rest of the revelers. This spot was previewed during the college football kickoff weekend.

In the second new ad, “A Royal Affair” (below), the wily king turns out to have a strong ulterior motive for demonstrating surprising patience with a couple of party guests from a neighboring kingdom who are insufferable boasters.

Bud Light’s popular NFL team-specific cans are also back for the 2018 season, updated to include the slogans, as well as logos, of the brand’s 28 team partners. The cans were in stores starting Aug. 13.

The brand also cemented loyalty with Eagles fans this week by unveiling a gift: a nine-foot bronze statue, commemorating the “Philly Special” play that clinched Super Bowl LII for the team.

The statue, located outside of the Eagles’ home stadium, Lincoln Financial Field, recreates quarterback Nick Foles asking head coach Doug Pederson for the play. It will remain in place for the season, and possibly beyond, reported Sports Illustrated.