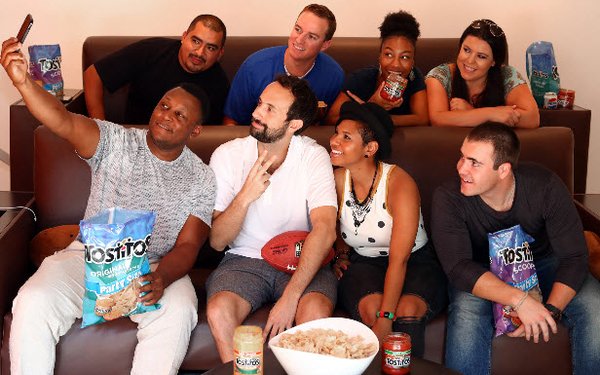 To support its NFL sponsorship, Tostitos is running a sweepstakes with a funky prize: a stadium-style sofa designed for home tailgating, aka “homegating.”

The sofa, with attached second-row seating, is designed to put snacks and soda within easy reach of game watchers by incorporating Tostitos chip ad dip bowls, Pepsi cupholders, and a fridge drawer. It also boasts tablet holders and LED lighting for team colors.

The random drawing winner will also receive a check for $3,000 — a fact mentioned in the sweep’s rules, but oddly, not in the brand’s announcement of the promotion.

Entry requires tweeting or retweeting @Tostitos with #TostitosHomegate and #Entry via Twitter, by September 10.

Former Detroit Lions runner Barry Sanders is helping to promote the sweepstakes, in part by vouching for the couch’s game-viewing benefits.

The PepsiCo brand will also display the couch during a Pepsi Generations Tour event tied to the Dallas Cowboys’ home opener on September 16, featuring a meet-and-greet with former NFL players and a concert by country music duo LoCash.

Fans with the matchup that makes it to Super Bowl LIII will be entered to win a trip to watch the game live in Atlanta on February 3, 2019.

For a limited time, the brand will also be selling local team-branded bags at nearby retailers. Tostitos NFL team bundles are being sold online while supplies last.