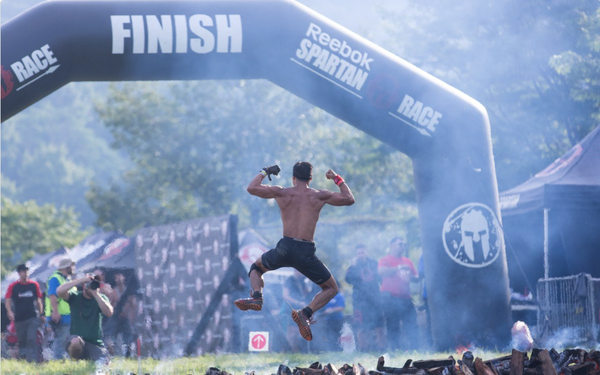 Rakuten internet services is the latest company to partner with the Spartan obstacle race and endurance brand.

The brands are similar in that they have “passionate” followers and both strive to motivate and empower customers, says Rakuten, Inc. founder and CEO Hiroshi “Mickey” Mikitani. Founded in Tokyo in 1997 as an online marketplace, Rakuten has expanded to offer services in e-commerce, fintech, digital content and communications.

Rakuten branding will be integrated throughout Spartan’s global ecosystem of events, digital advertising, content and merchandise. The brand will become the official kit sponsor for the Spartan Pro Team, and race finisher shirts will now feature the Rakuten logo.

The partnership officially begins Sept. 29 at the “2018 Spartan World Championship Powered by Rakuten,” a race set to draw athletes and spectators from more than 50 countries to North Lake Tahoe, Calif. In addition to the race, Rakuten will power the race-day live stream on Facebook WATCH as well as the post-event cable broadcast.

Rakuten will fulfill an expanded roster scope of Spartan’s marketing and technology needs, including use of Rakuten Marketing digital and affiliate marketing services. Global messaging and calling service Rakuten Viber will become the official communications channel of Spartan.

This is not Rakuten’s first sports-related sponsorship. The company is a global marketing partner of the NBA, innovation and entertainment partner of FC Barcelona, the first-ever jersey badge sponsor and official partner of the Golden State Warriors, and the presenting sponsor of Shakira’s El Dorado World Tour.