JCPenney Takes Another Swing At Fashion 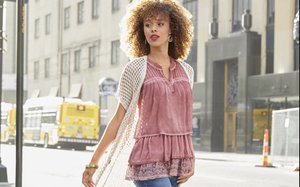 JC Penney, still struggling to emerge from a sea of department store sameness, says it is introducing Artesia, a boho-style brand it hopes can win back some of its departed customers.

The announcement comes on the heels of disappointing results, with the company still leaderless; it has yet to name a CEO to replace Marvin Ellison, who left for Lowe’s back in May.

Describing the new collection as “effortlessly chic” and “relaxed,” JC Penney says the lace, tassel and fringe-trimmed line is launching in some 400 stores, with each piece priced at $30 or less.

Last month, the Plano, Tex.-based retailer announced that its comparable sales inched up 0.3 % for the second quarter, saying its renewed focus on fashion for women are paying off. Total net sales sank 7.5% to $2.76 billion, compared to $2.99 billion in the previous year, mostly due to store closures.

The stock fell to its lowest levels in the company’s history, and S&P Global ratings downgraded the company. “The negative outlook reflects the heightened risk that operating performance will not stabilize over the next 12 months due to further operational setbacks and uncertainty around the company's strategy and path forward under new leadership,” it says.

Some experts cite the retailer’s lack of fashion sense as a big part of its problem. JC Penney “remains unfocused and unsure about its strategy,” writes Neil Saunders, managing director of GlobalData Retail, in his report on the results, “first trying to attract younger shoppers, then younger moms, and now back to older shoppers. In our view, this flailing around is a symptom of a wider problem in that JC Penney no longer has a sense of what it wants to be and who it wants to serve.”

Losses swelled to $101 million, more than double the downward trend of the year-ago period, and the company lowered its financial forecasts for the rest of the year.

Losses are also growing at Lands’ End, which just announced its second-quarter results, reporting a quarterly loss of $5.3 million, up from a 43.9 million loss in the year-ago period.

Like JC Penney, it’s also struggling to regain the attention of mainstream women. Sales rose 2% to $307.9 million from $302.2 million in the prior year, with a 6.4% jump in direct-to-consumer sales, which rose to 4276.6 million, and a 26% tumble in its retail segment. In part, that’s due to the loss of 57 of its Lands’ End Shops in the long-suffering Sears. But even in existing stores, shoppers are passing the brand by: same-store sales in its remaining Sears location fell 6.7% and 0.6% in its company-owned stores.