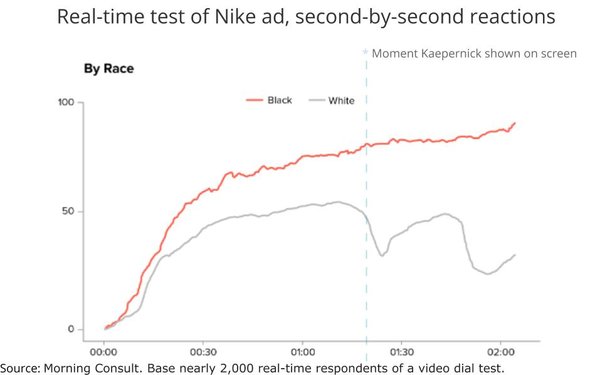 Respondents to the Morning Consult test were asked to indicate in real time whether they had a favorable or unfavorable view of the commercial they were watching.

This graphic shows explicitly what happens along racial lines when Kaepernick comes onscreen near the end of the spot. Self-reported dial responses from White respondents dive, while those of Black respondents spike.

Overall, 39% of respondents said they had a very positive opinion of the ad, compared to just 9% who had a negative opinion.

“The results indicate that black Americans, Democrats and younger generations were much more receptive to Kaepernick’s involvement and message than white Americans and Republicans,” the Morning Consult report notes, adding: “Additionally, Nike users had a more favorable view throughout than non-Nike users.”

The test was conducted Sept. 6 and 7 among a national sample of 1,902 adults 18+. Respondents were shown Nike’s “Just Do It” ad, and then answered a series of questions about the commercial. The interviews were conducted online and the data were weighted to approximate a target sample of registered voters based on age, race/ethnicity, gender, educational attainment, and region.