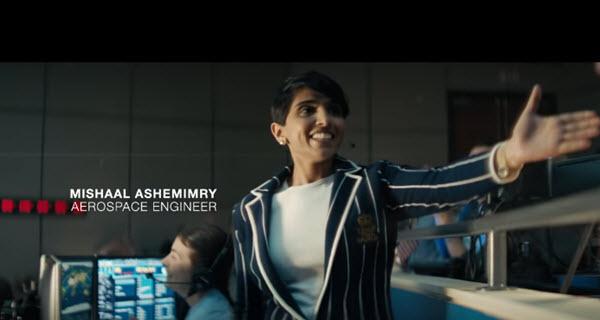 Models may be flooding town for New York Fashion Week, but Macy’s is going in a new direction with its fall campaign, calling out six real-life women with remarkable style all their own.

Themed “Remarkable You,” the spots focus not just on this fall’s trends, but on the way getting dressed each morning allows these women to move through their day, confident that they’re looking great as they change the world.

The retailer’s heroines are a public defender; an aerospace engineer; a civil engineer; a fourth-grade teacher; an orchestra conductor, and an assistant NBA coach.

The ads, from BBDO NY, are set to No Doubt’s “Just a Girl.” The 30-second version is scheduled to run through early October on network and cable. A 60-second version (below), as well as spots focusing on each woman, are running online, as well as on its social platforms.

The Cincinnati-based chain is steering online shoppers toward its “Macy’s Presents The Edit,” highlighting the latest in fall trends, including statement sneakers, fall florals and menswear jackets.

The new campaign comes as Macy’s continues to press its turnaround plan, last month reporting sales and profits ahead of expectations, with enough confidence to increase its full-year forecast.

Still, some observers remain skeptical that its fashion pushes and omnichannel efforts can stave off the onslaught of competition, both from online retailers and specialty apparel companies.

“Department stores are most exposed to online competition and will be forced to compete on price, and the renovation of such a large store base to meet the retailing demands of the modern consumer will require tremendous investment and complex restructuring,” writes Jaime M. Katz, senior equity analyst at Morningstar.

“We think Macy's is doing everything in its power to fight these headwinds by shifting exposure to stronger categories, increasing exclusive product/private label, and providing the value demanded by consumers,” with its Backstage concept, Katz continues. “However, in the long run, we think the overcrowded competitive landscape, continued decline of department store market share to online and off-price, and shift of share of wallet to other categories will continue to pressure top-line growth.”