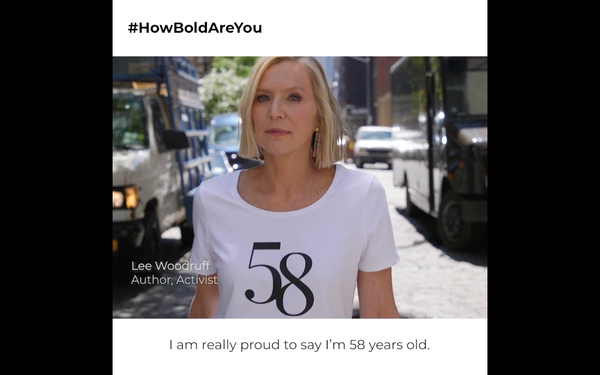 Chico’s, the women’s specialty retailer, is taking its “How bold are you?” campaign one step further, asking women to post their age in a new social media push.

The new video stars 58-year-old Lee Woodruff, an author and entrepreneur, who tries to talk women on a New York City sidewalk into slipping into a T-shirt that proclaims their age, then posting the picture on their social media page, using a Facebook Messenger bot.

One woman, whose identify is obscured by a happy-face mask, declines the challenge, but everyone else shown in the video steps up. Many proclaim the benefits of aging -- from not sweating the small stuff to self-pride -- after battling some self-consciousness. “I didn’t think I’d be this scared, but it actually feels a little funny, right?” says one participant.

“The response to #HowBoldAreYou has been tremendous,” says Shelagh Stoneham, Chico’s senior vice president of marketing, “both from our customer base and non-customers who are embracing this age-positive idea.” She says this next step is to take it to the next phase, encouraging women to talk about “the wisdom and confidence that comes with age with other people. The bot lets them proudly display their age to the world.”

“This just made intuitive sense,” says Andrew Bailey, CEO, North America, of The&Partnership, the agency that created the ad. “It’s one thing to get women talking about age. It’s another to get them to post about it.”

The pair acknowledges there are considerable risks with such an effort. For one thing, such posts might invite comments like, “You don’t look 50.” But looking younger isn’t the point, she says;  “We don’t want to be misinterpreted as saying 'Defy your age.’ We are saying that age is irrelevant.”

And for another, in an era of widespread online shaming, it’s a dangerous time to ask women to post images of themselves saying, in effect, 'How do I look?’

Bailey tells Marketing Daily that Chico’s is “very confident our customer base won’t stand for it if anyone starts talking negatively about our brand, ageism or personal appearance. They’ve got strong opinions about stigmas around age, and they will come to the aid and rescue of other women. We have faith in our followers.”

Ads are running in social-media channels.

Chico’s announcement comes just weeks after the Fort Myers, Fla.-based chain posted second-quarter results that it says demonstrates that its turnaround plan is working. Sales for the quarter fell to $544.7 million, compared to $578.6 million in the year-ago period, reflecting store closures and a calendar shift. And comparable store sales also fell, declining 3.2%, with fewer sales transactions.

Nevertheless, Stoneham tells Marketing Daily that the company is encouraged by the reaction to #HowBoldAreYou, launched in March.

“This campaign has started to drive consideration and new customers. We are absolutely on the right track and looking for new ways to extend it, both this year and into 2019,” she says. “This is a signal of our commitment to encouraging women to live life on their terms.”

apparel
1 comment about "Chico's Asks Women To Wear Their Age".
Check to receive email when comments are posted.
Next story loading