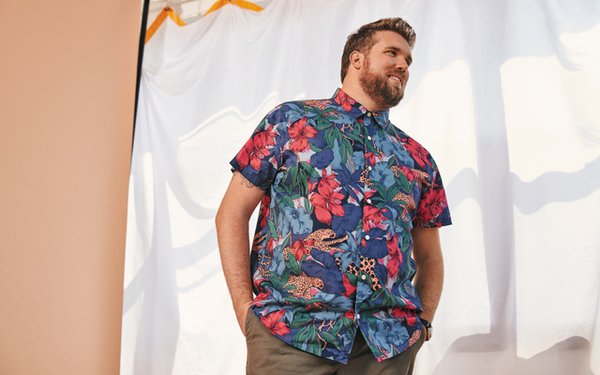 Bonobos is throwing its arms around bigger men, adding more-inclusive sizes in its clothing to welcome new customers into the fold.

While many brands have been stepping up their plus-size games in recent months -- including J. Crew (along with its Madewell stores), H&M, Target, Nordstrom and Old Navy -- those efforts have focused mostly on women’s clothing.

Bonobos says the move is the logical next step of its #EvolveTheDefinition campaign, introduced last month, in which it invites all kinds of men to break down the dynamics of masculinity, often in surprising and unexpected ways, from talking about crying to transgender issues.

Bonobos, a brand that made its name on “the better-fitting pant,” strives to be about “diversity in a one-size-fits-all world, so diving into extended sizing was really a natural extension for us,” says Carly Rappoport, a spokesperson for Bonobos, now owned by Walmart.

But it’s not just about customer loyalty: Plus-size clothing for men is an important commercial market, estimated at some $13 billion, and growing at 4% a year.

The challenge, of course, was making sure the clothes did fit. The company did extensive research to overcome the problems that come with simply upsizing designs.

“For example, to prevent bunching and billowing in the sleeves of dress shirts, we’re using a two-piece design,” she tells Marketing Daily, adding that the company’s unconstructed blazer took many attempts before designers felt they had it right. “We even went through three iterations of our tie, to make sure the loophole on the back of the tie fell in the right place.”

Where the upper limit in sizes was a 40-inch waist, it’s now 54 inches. Neck sizes have gone from 17.5 inches to 22 inches. And in casual shirts, knits and T-shirts, sizing now goes up to size 4XL, from 2XL.

Bonobos says that unlike some companies, it won’t charge extra for the increased sizing, with its usual prices of about $100 for pants, $128 for dress shirts and suits ranging up to $750.

The retailer is advertising the new sizes on digital channels and social media, in store window displays, and through email and affiliate programs.

With just 56 stores, Bonobos still does most of its business online. (Rappoport says there are still no plans to offer Bonobos in Walmart stores.)

So far, she says, the response has been solid, with the Instagram Story announcing the new sizes garnering 11,000 views, roughly double its usual Story view.

Separately, J. Crew relaunched this week with a new ad campaign as well as expanded sizing. Themed “New Crew,” the effort celebrates a “better together” ethos of diversity, focusing on noteworthy crews doing everything from saving the oceans to adding more rhythm to the world.