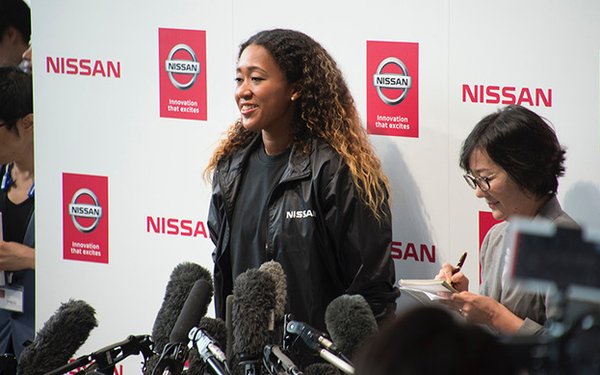 Just days after defeating Serena Williams at the U.S. Open, Naomi Osaka has reportedly landed a $10 million clothing endorsement deal with Adidas. It would make her Adidas’ best-paid female athlete.

And while women’s tennis gear and apparel represent a relatively small market -- about $100 million in the U.S., according to Matt Powell, NPD’s senior industry advisor for sports -- the marketing stakes are potentially much higher.

The deal comes at a time when Adidas, Nike and Under Armour are all flexing their feminine side, fending off the apparel onslaught from Lululemon. (Currently, Nike is the No. 1 seller of women’s athletic apparel, followed by Lululemon, according to NPD Group, the market research company.)

Osaka, 20, is already an Adidas athlete, but is poised to become an endorsement superpower. She just signed a three-year deal with Nissan, and also has contracts with  Yonex, Nissin Foods, Wowow and Citizen Watch.

The Adidas deal would “put her closer to Serena Williams's reported $18 million annual endorsement income than any women athlete in the world since Maria Sharapova was at $12 million to $13 million prior to her drug-related suspension,” says Barry Janoff, executive editor at NYSportsJournalism. (Williams’ five-year Nike pact has been reported to be worth $40 million.)

“Osaka has the skill, personality (including a sense of humor) and looks, and at 20 connects with a strong marketing demographic... to attract more marketers,” he tells Marketing Daily.

An Adidas spokesman declined to comment on speculation about its partnership with Osaka.

Representing Japan, the biracial athlete (her dad is Haitian, mom is Japanese and she grew up in Florida), has won over hearts by keeping her cool in her win over Williams, marred by officiating many have denounced as sexist.

It’s too soon to say whether Adidas will turn its brand conversation to race and gender bias, as Nike has chosen to do with its controversial decision to use Colin Kaepernick in its “Dream Crazy” campaign. But Powell tells Marketing Daily he thinks it is likely: “Brands are smart to share their core values with their consumers,” he says. “I think we will hear more social issues in sports brand marketing.”

Nike, meanwhile, is turning up the volume on its marketing to women with a new–and noisy–rally cry. “The louder we play, the more we change the game,” it says in its introduction of the new ad, which it says is about the power of female determination: “Get Loud. Get Moving.” (Besides the very vocal Williams, it includes some crazy screams from boxers, runners, BMX riders and even an underwater polo match.)