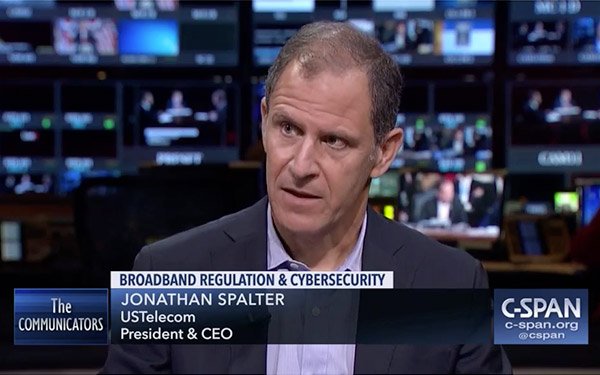 Faced with new privacy rules in Europe and California, the broadband industry lobbying group US Telecom is joining Silicon Valley's Internet Association in advocating for a national privacy law.

"We believe that it's time for our Congress to take steps, to stand up, and develop our own national framework ... that provides consistent, uniform privacy protections for all consumers, regardless of where they go on the internet," US Telecom president and CEO Jonathan Spalter says on the newest episode of C-SPAN's "The Communicators."

Spalter added that broadband providers support a "strong national commitment" to network security, consumer choice, transparency, and appropriate notification in instances of a breach. He didn't elaborate on details such as how consumers would exercise choice, or what kinds of data breaches should trigger notices.

Earlier this week, the Internet Association endorsed the idea of federal privacy legislation. That organization proposed that privacy protections should be be consistent online and offline, and "technology neutral."

The organizations' call for legislation comes in response to Europe's relatively stringent privacy rules, which took effect in May, as well as a new California law. California's law, slated to take effect in 2020, allows consumers to learn what personal information about them is held by businesses, and to opt out of the sale of that information.

Soon after the measure was passed, a host of companies reportedly began pressing Congress to develop a federal privacy law that would trump individual state laws.

Privacy advocates have long argued that broadband providers should be subject to heightened requirements, noting that internet service providers can glean detailed knowledge about subscribers' online activity by examining all unencrypted traffic that passes through their networks. But broadband providers say they can't effectively compete in online advertising with companies like Google and Facebook if those companies don't have to follow the same privacy rules.