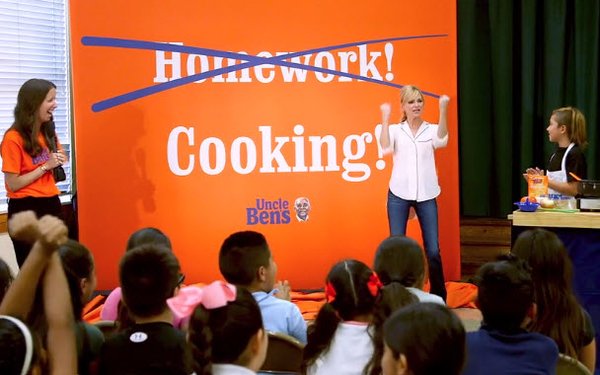 Uncle Ben’s is winning fans among school kids by creating a program that lets them swap homework time for cooking time.

The Homework Pass Challenge is an extension of the brand’s Ben’s Beginners program.

That program, which began in 2012 as a contest designed to encourage parents to spend time teaching their kids to cook, was based on research showing that family time spent cooking together can help kids develop healthier eating habits and strengthen family dynamics.

According to Uncle Ben’s, it’s since grown into a multichannel marketing campaign that’s delivered bottom-line results for the brand, and resulted in more than $1 million in prize money being awarded to families and schools, benefiting some 27,000 kids.

(Each of the five families who win a grand prize in the annual contest, which requires submitting an image of a parent and child cooking a rice dish together, receives $15,000. In addition, each winning child’s school receives $30,000 for a cafeteria makeover.)

The idea of approaching schools to agree to let students exchange some homework time for cooking time emerged from parents confiding that while they believe in the benefits of cooking with their kids, they lack the time to do it.

The concept also syncs with the growing trend of schools reducing traditional homework for a variety of reasons, including freeing up time for other types of learning, family interaction and play.

Uncle Ben’s reached out to schools nationwide to arrange “homework passes” that enable kids to cook with their families every night for a week. The brand’s site offers a kit and learning activities that tie into cooking, like using measurements as math problems.

So far, a dozen schools have agreed to participate in the homework passes program.

Actress Anna Faris, who says she values time cooking with her own six-year-old son, is helping to promote the program.

Uncle Ben’s shot a video, being used on its social channels, of kids in a school in Los Angeles cheering as Faris made a surprise visit to announce that their school was going to let them cook in place of their normal homework.

The Homework Pass Challenge was led by Olson Engage, which is Uncle Ben’s PR agency of record. BBDO San Francisco is the creative AOR on the Ben’s Beginners campaign.