'Time' Marches On, This Time To Salesforce Founder Benioff 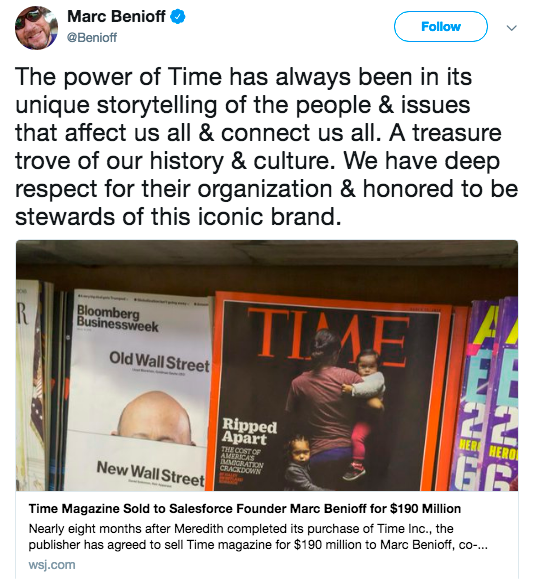 Storied newsweekly Time magazine has turned another page, announcing a deal late Sunday that it has been acquired by Salesforce founder-CEO Marc Benioff.

Benioff and his wife Lynne are paying $190 million to buy the title from Meredith Corp., which acquired parent Time Inc. for $1.8 billion less than a year ago.

The deal is expected to close within 30 days, according to The Wall Street Journal, which first reported the news.

“The power of Time has always been in its unique storytelling of the people & issues that affect us all & connect us all,” Benioff confirmed int a tweet Sunday night, adding: “A treasure trove of our history & culture. We have deep respect for their organization & honored to be stewards of this iconic brand.”

Reactions in social media were generally positive, with some likening it to Amazon.com founder Jeff Bezos’ personal acquisition of The Washington Post.

How the Benioff family will manage Time magazine remains to be seen. Benioff is known to be a Democrat who supported Hillary Clinton’s 2016 presidential bid. 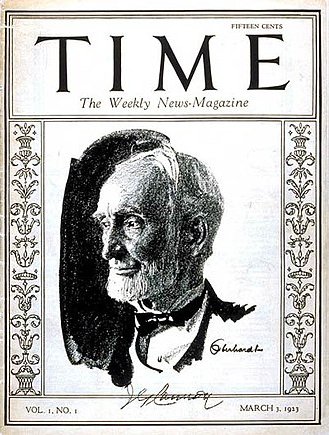 m&a, magazines, print, publishing
1 comment about "'Time' Marches On, This Time To Salesforce Founder Benioff".
Check to receive email when comments are posted.
Next story loading