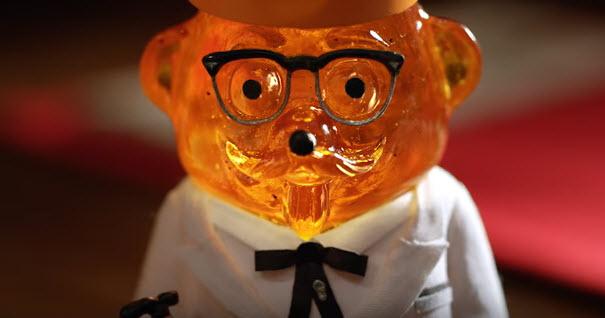 Having been portrayed by male celebrities ranging from George Hamilton to Jason Alexander, as well as by one female, Reba McEntire, KFC’s Colonel Sanders (in legacy form) is now moving on to other species.

To launch its Hot Honey fried chicken menu offering -- featuring a sauce blending honey and mild peppers -- the QSR and Wieden + Kennedy have created “Colonel Bear”: a bear-shaped honey bottle that looks, dresses and talks like the brand’s founder (with a pour spout cap on his head).

Colonel Bear is appearing in humorous TV/digital spots (see first one below), as well as clips on the brand’s social media accounts.

In fact, in the just-released latest TV spot for KFC's 10-piece Chicken Feast, Alexander's son joins him, playing "the boyfriend."