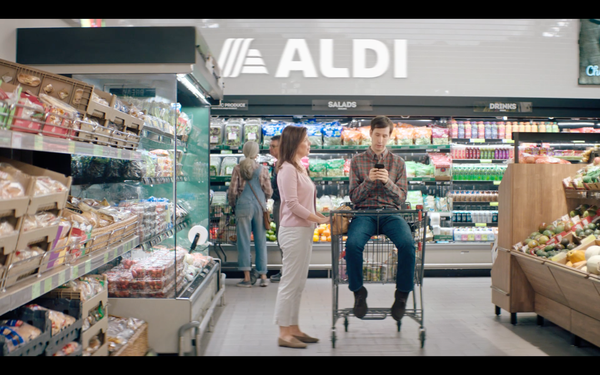 Aldi may be serious about low prices, but it’s got a sense of humor about its customers. It’s introducing a new “Shop Differentli” campaign that spoofs the concern people have about things they love: The kickoff ad shows a mother gently explaining to her son how Aldi selects only the very best olives for its olive oil, before we realize she’s got the young adult trapped in a shopping wagon’s child seat.

Aldi, based in Germany, hasn’t been shy about its plans to dominate the U.S. grocery landscape. It already has 1,800 stores in 35 states, and recently revealed plans to spend $5 billion expanding to 2,500 in the next five years, remodeling existing stores and dramatically expanding fresh-food offerings. And while the company made its name with a limited assortment and a no-frills attitude that keeps prices low, industry observers are describing its store remodels as remarkably upscale, more on par with chains like Trader Joe’s and even Whole Foods Market.

The expansion effort emphasizes fresh, organic and easy-to-prepare options, as well as online ordering and delivery in its major markets. Besides recently winning Supermarket News’ 2018 Retailer of the Year award, the chain says it’s won some 300 awards since 2017 for its exclusive brands.

A spokesperson for Aldi, with U.S. headquarters in Batavia, Ill., tells Marketing Daily the spot is the first in the new national advertising campaign, and includes 30- and 15-second formats on broadcast and cable networks, and also includes online video and social media advertising, as well as print. Leo Burnett is the agency.

Additional ads focus on the chain’s new push into high-quality fresh produce, fish and meats, that it believes are crucial to winning over more fans.

Meanwhile, Lidl, another German grocery chain expanding in the U.S., hasn’t let up on its efforts to get shoppers throughout the Southeast to #RethinkGrocery. Its ads portray regular supermarket owners as dastardly con artists.