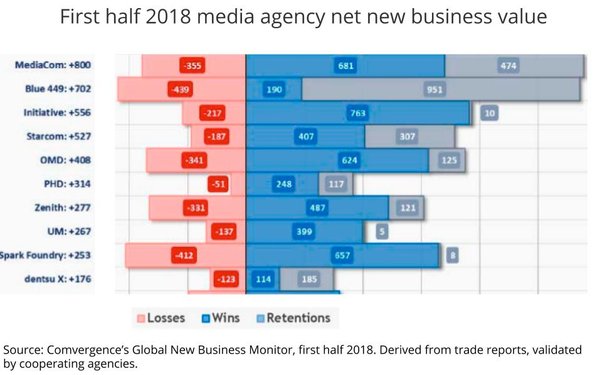 WPP’s MediaCom was tops in the new business department during the first half of 2018, according to a new report from agency tracker COMvergence.

According to the report, the agency won pitches valued at $800 million (estimated annualized billings) during the period (including retentions).

Publicis Media’s Blue 449 had the second-largest total--$702 million--largely due to its retention of the T-Mobile assignment.

IPG’s Initiative was third overall with a win/retention total of $586 million including the addition of the $345 million Liberty Mutual business.

Rounding out the top five were Publicis Media’s Starcom ($527 million) and OMD ($408) respectively.

By holding company, Publicis was number one with a combined win/retention total for its media agencies of a little more than  $1.9 billion, followed by IPG Mediabrands ($950 million), GroupM ($871 million), Omnicom Media Group ($846 million) and Dentsu Aegis Network ($402 million).

The report assessed 915 media account moves and retentions across 31 countries (with or without a review) totaling $12.2 billion. Of that total 10% was won by independents led by Horizon Media ($460 million).

More on the report can be found here.