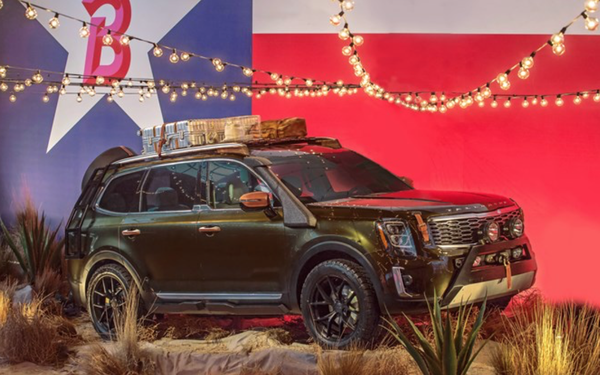 Kia is taking a page from high-end automakers by introducing a one-of-a-kind bespoke version of its Telluride SUV.

Created by Kia’s U.S. design studio in Irvine, California, the customized Telluride was a flashy way for the automaker to debut the brand’s largest and most upscale vehicle. The SUV’s production version makes its official debut in January at Detroit’s North American International Auto Show.

Rolls-Royce recently unveiled bespoke versions of several of its ultra-luxury models at a party held during the Pebble Beach Concours d’Elegance. Italian supercar-maker Ferrari has manufactured one-off versions of vehicles outside its mainstream color range. Aston Martin offers a dedicated website to show off its bespoke options.

Kia has shown a number of one-off custom cars over at auto shows and events over the years, but the Telluride that debuted at Fashion Week is its  first bespoke model to result from a direct collaboration between its U.S. design studio and a fashion designer, says Saad Chehab, vice president of marketing communications, Kia Motors America.

“Right now, this is purely a one-off, but that doesn’t mean we won’t explore other opportunities, so you never know what the future holds,” Chehab tells Marketing Daily. “We want to be fresh and unique in our approach to upcoming vehicle launches, and you’ll hear a lot more about Telluride between now and the official production vehicle unveiling.”

The bespoke edition was created to demonstrate the off-road as well as the travel-in-style potential for the SUV, he says.

The designer had a natural connection to the automaker: His mom drive him to school in East Texas in a Kia Sedona.

“When I left Marfa, Texas, where I designed my collection, I started talking with Kia,” Maxwell says in a release. Kia's philanthropic help for Marfa also factored into his decision: “Kia is not just funding necessary technological purchases and educational programming to give the children of Marfa the quality education they deserve, but also providing a vehicle for local teachers’ use.”