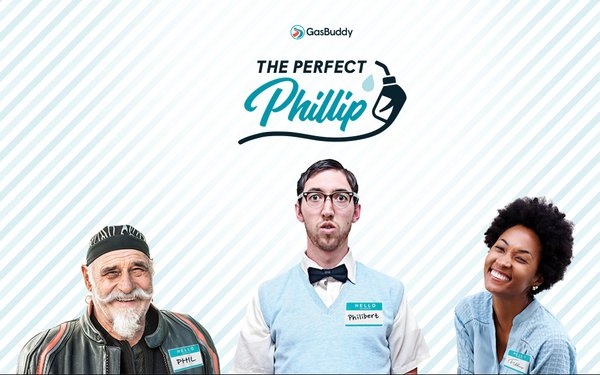 The former Nike CEO, rock star, “Everybody Loves Raymond” creator, Zen-imbued basketball legend and famed beach volleyballer could potentially meet up tomorrow  at  a Los Angeles gas station that will be giving out free fill-ups (get it?) to people named Phillip or Philip. Or Phyllis or Felipe or other variations.*

To make clear, this is a phil-up that would otherwise cost $25 or less.  The secret location for the giveaway will be disclosed on GasBuddy social media channels Thursday morning. After giving away gas to 200 Phils and Philomenas, the stunt will have been, uh, fulfilled.

GasBuddy, an app with over 75 million downloads, helps consumers find service stations based on price, location -- and, it says, “whether or not the restrooms will make you gag.”

According to its posted data, GasBuddy says today’s lowest-priced gas in Los Angeles is $3.19 and the average gallon of regular costs $3.66. It’s the most expensive market for gasoline in the nation.

Boston-based GasBuddy competes in that app space with, among others, Drivvo and Gas Guru, but it started as a website in 2000, so it’s possibly the oldest one of its type in business.

It apparently can be a pretty good bulletin board for some issues. With the flooding in several Southern states, some GasBuddy members tweeted locations of service stations that still had gasoline.

Through the end of the year, GasBuddy is offering many other sweepstakes (being named Phil is not necessary) for motorists to win free gas -- and those have already gotten 15,000 entries, says Allison Mac, the company marketing director.

There’s no particular reason the fill-up promotion is happening now -- but one good excuse is that this is about one year after it started its GasBuddy card, linked to a user’s bank account, which provides a five-cents-per gallon discount on gas purchases.  Mac says the discount card has snared 300,000 drivers since last August.

Mac has spent today enjoying the buzz on social media. “Everybody’s getting in touch, sharing the news with all their Phils,”  she says. And predictably, it’s been getting mentioned on morning radio shows that pretty much share the same audience.

“We just love the name Phillip,” Mac says. “Isn’t it a great name?  It’s common but not too common -- like a Chris or Mike. And it can be either sex, or it can be Felipe.”  With this promotion, Mac says, “Something I’ve discovered is that people love puns.”