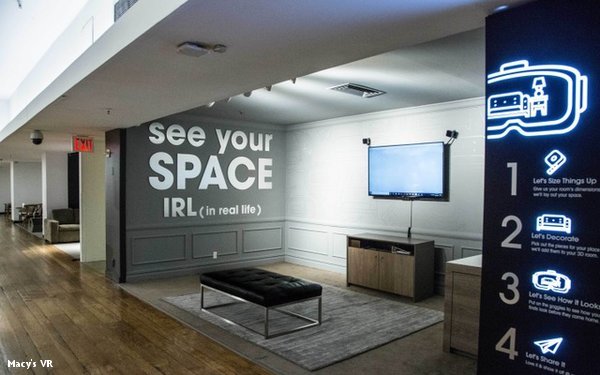 As department stores keep striving for a digital edge that will tempt shoppers back to stores, Macy’s is adding to its in-store technology, while Neiman Marcus is beefing up its digital staff.

The rotating selections will include new and emerging apparel, accessories, beauty, entertainment and technology brands, like Love Your Melon apparel and Charleston Gourmet Burger sauces.

Macy’s says it expects its previously announced VR for Furniture experience to be available in 69 stores by early November, and that pilot stores are showing a 60% increase in furniture sales. VR also results in greater satisfaction, with returns falling to less than 2% of total transactions, according to company stats.

A new AR app, “Visualize Your Space,” lets customers virtually move Macy’s furniture products around their homes. Currently available on iOS, the app is expected to be available on Android phones early next year. (Competitors like Ikea and Wayfair also offer AR and VR shopping tools.)

Macy’s in-store virtual mirror kiosk lets shoppers experiment with 250 beauty products, and are available in 50 stores. And the company is testing a similar technology on its app.

It also announced a new “Beauty Playground” technology designed for beauty associates, which includes information from vendors and influencers as well as tools for exploring new techniques.

And Neiman Marcus, which just announced its fourth consecutive quarter of sales gains, is making personnel changes to step up its innovation game.

The new hires, promotions and refinements put it in “the best position to lead in digital and data excellence, drive growth, and deliver on our goals to continue to elevate the company as one of the world’s most prestigious luxury retailers in the world,” CEO Geoffroy van Raemdonck, says in its announcement.