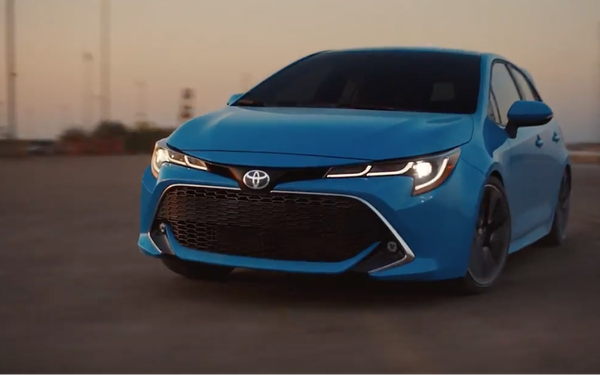 Toyota’s national marketing campaign for the 2019 Corolla Hatchback promises a vehicle that enables drivers to live in the moment and experience life to the fullest.

Creative highlights moments where Corolla drivers come together with friends and loved ones for adventures and great times.

“Tablet down, let’s go” says the dad as the family preps for the road trip in one spot. They pile into the car and take off on an adventure. Before you know it, the tablet is forgotten, and life takes over. This family is living life “Greater Than” before.

The effort, which runs through Feb. 3, features six 30-second spots created for TV and digital placements, as well as a mix of 15-second and 6-second spots.

The campaign targets a transcultural audience with assets developed by three of Toyota’s agencies of record, including Saatchi & Saatchi, Conill and Intertrend Communications.

The three Saatchi & Saatchi spots directed by Jones + Tino, include  “Roots,” in which a family experiences the joy of a spontaneous, fun-filled day, “Piñata,” where a group outing culminates with a birthday surprise and “Scratches,” inspired by an unanticipated journey off the beaten path.

Additionally, spots will air within select movie titles in theaters nationwide in conjunction with National CineMedia.

For Generation X, “we want this vehicle to be the perfect blend of excitement and versatility for this audience,” he says.

For the second group, families with young children, “safety is high on the list of priorities," he says. “The Corolla Hatchback delivers a five-star safety rating along with practicality, excitement and freedom the driver craves.”