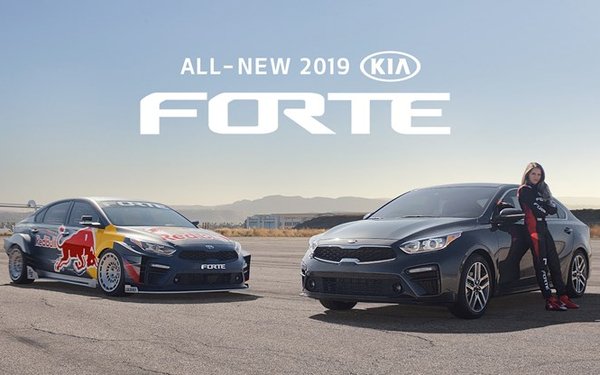 To launch what the automaker is calling its most sophisticated compact car ever, Kia built a custom, not-for-sale drift car Forte that features a Red Bull wrap, then hired professional race car driver Collete Davis to drive. But she’s not driving the souped-up custom car, she’s featured in the production model.

The first spot, “Forte vs. Forte,” shows Davis literally launching the 2019 Kia Forte off a ramp and jumping it over the drift car Forte -- a feat that Davis performed for real, with no wires, nets, or other stunt drivers in sight -- to demonstrate the Forte’s 8-inch touch screen.

Two additional spots, “Chicken” and “Smoke Machine,” will air in the coming weeks. A long-form video, “One-Take Wonder” is shot from Davis’ perspective as she speeds down the track and takes flight, jumping an all-new Forte. Seven cameras captured the action from every angle and the entire sequence was shot in just one take.

A suite of digital and social content will be released to round out the campaign, from both Kia and Red Bull.

“This adrenaline­-filled campaign featuring a baby Stinger in a Red Bull suit screams ‘look at me,’” Chehab says in a release. “Even though some may question the idea of a Forte in racing livery, we are delivering an entirely new take on what many people see as simply a daily commuter car.”

Kia and Red Bull collaborated on the Forte drift car and are developing a three­-part YouTube series hosted by Davis that documents the vehicle build from start to finish, including on-­track testing.

“Kia is fueled by youth, and working with Red Bull is a mirror reflection of our youthful attitude,” Chehab says.