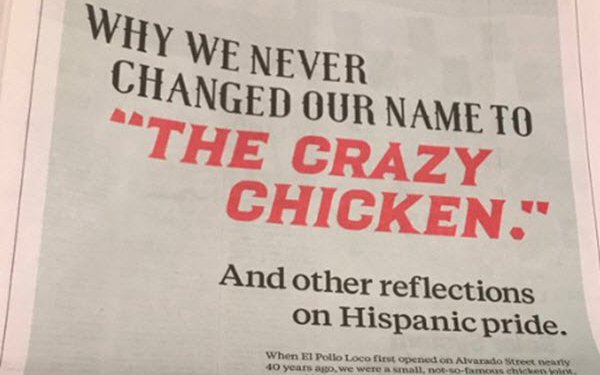 El Pollo Loco has created a dedicated campaign to reach out to the Hispanic community in the Los Angeles market.

During Hispanic Heritage Month, which started on Sept. 15, the QSR is running a series of four full-page ads in the Sunday edition of The Los Angeles Times.

The ads, from the Vitro agency, are designed to honor the month’s celebration of Hispanic culture, while explaining why El Pollo Loco is in a credible position to do so, given the brand’s history and continuing traditions.

The first ad (shown), headlined “Why we never changed our name to ‘The Crazy Chicken,’ points out the chain’s origins as a small chicken joint on L.A.’s Alvarado Street, started by a family of immigrants from Mexico.

The copy that follows celebrates diversity while touching subtly on the tensions around immigration issues today:

"That’s why we still go by the original, untranslated name we first came to this country with: El Pollo Loco. This year, at this moment in our nation’s history, it seems more important than ever to stand proud and celebrate Hispanic Heritage Month. To take the time to honor the values, contributions, and accomplishments of this great culture. The hard work. The love of family. The creativity. The passion and perseverance..."

The second ad stressed that 81% of El Pollo Loco’s employees are Hispanic, and explained why the company aspires to become the Hispanic employer of choice.

The third ad describes how El Pollo Loco is part of the fabric of Los Angeles, and the fourth tells the story of the chain’s founder, Pancho Ochoa.

El Pollo Loco views Hispanic Heritage Month as celebrating “the history, struggles and accomplishments, diversity and power of America — a country of immigrants who have all made significant contributions in a multitude of ways,” states a brand rep. “We believe that’s something all Americans should take pride in.”

The chain’s 480 company-owned and franchised restaurants are located in California, Arizona, Nevada, Texas, Utah and Louisiana.