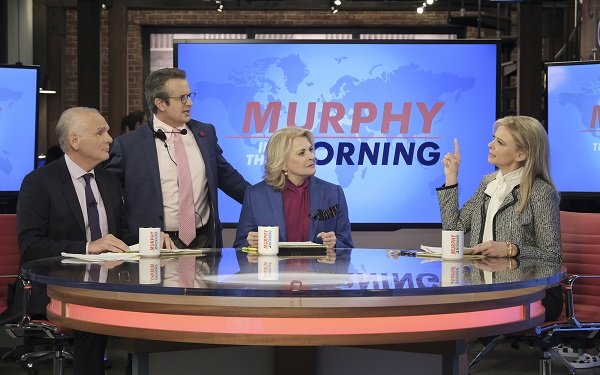 Watching the new “Murphy Brown” brings with it a whole new category of pain for which the only recourse for relief is a preventative measure: Don't do it.

To the decision-makers at CBS who OK’d it, the idea of bringing back Candice Bergen, 72, and her former co-stars after a 20-year absence to do fictional battle with the Trump administration might have looked good on paper.

But the finished product has a musty air to it, like the whole thing was just recently unpacked from deep storage and reeks permanently of mothballs.

Bergen is listless. The writing is juvenile. The sets, such as the bar Murphy and her co-workers repair to after their show is over (now manned by Tyne Daly), are so unrealistic that they look like they were designed and built by set decorators who last worked before the advent of high-definition television.

The attacks on Trump are inevitably predictable. Worse, they are the same thing various sitcoms and late-night comedy shows have been doing for the last three years or more -- ever since (if not before) Trump first descended into the lobby of Trump Tower on an escalator to announce his candidacy for president in June 2015.

The new “Murphy Brown” is a very late arrival to this party, to say the least. If you watch the show, you might even conclude that “old Murphy” (as Donald Trump fictionally labels her on the show) has missed the anti-Trump boat entirely.

Do not hold your breath waiting for this show and its outspoken lead character to come up with anything new to say about Trump, the news media in general or Fox News Channel in particular.

On this show, Fox News has been fictionalized as the “Wolf” network. Get it? Fox? Wolf? Who is writing this show? Twelve-year-olds?

On the show, Murphy is seen waking from a deep sleep on Election Night 2016 like a latter-day Rip Van Winkle. Where has she been since 1998, when the old “Murphy Brown” went off the air? I could try and explain that here, but since nobody cares, I will refrain.

As the premiere episode airing Thursday night proceeds, Murphy is offered a two-hour morning show by a fictional cable network.

At the same time, her son -- the now-grown Avery who was born during the old show and who is now a swashbuckling TV journalist -- is offered his own morning show in the very same time slot on the dreaded Wolf network.

The scene in which mother and son each reveal their new-show news to each other is so poorly rendered -- with neither of them reacting with the kind of surprise you might expect over the setting up of this one-in-a-million mother-son competition on cable news -- that it's a wonder CBS didn't order it to be redone.

Much of the show consists of Bergen making windy speeches and then appearing visibly out of breath after doing so.

Among other things, she describes the Wolf network as a place “where all the men are conspiracy theorists and all the women are dead behind the eyes!” Cue canned laughter.

She refers to the Wolf network as “the ministry of propaganda” and, at various times, Murphy and her cohorts take shots at disgraced real-life news personalities such as Charlie Rose and Matt Lauer.

Taking shots at real-life people in the news and news media seems to be the theme of this show. In Episode One, Murphy has a Twitter war with Trump.

In Episode Two, Murphy sneaks into the White House disguised in a wig like she's Lucille Ball sneaking in somewhere with a false mustache in a late episode of “Here's Lucy.”

Once inside the White House, Murphy then spars with Sarah Huckabee Sanders at a press briefing and delivers a long-winded sermon about journalism.

In the process, Murphy blatantly calls Sanders (who is rendered in the scene by cutting her in from videotape of real-life press briefings) a liar.

Oh, and by the way, if anyone from Wisconsin is reading this, please note that Murphy Brown hates your state.

She says so in Episode Two when she describes the delight she experiences when spitting out her car window onto Wisconsin Avenue in Washington because, she explains, Wisconsin was once a blue state that turned red.

In response, people from Wisconsin or anywhere else might ask the newly awakened Murphy Brown: Who asked you?