'Last Man Standing' Picks Up Right Where It Left Off 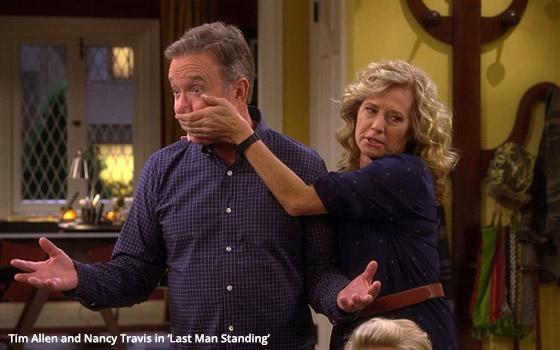 The new TV season’s parade of TV oddities -- including remakes and reboots of old shows -- plus, in this case, the revival of a show that was canceled by another network -- continues Friday night with the Fox debut of “Last Man Standing.”

This is the show starring Tim Allen as a middle-aged guy who spouts views that are right of center -- which on mainstream network television is an oddity indeed.

To bring you up to date on the “Last Man Standing” saga: This show, starring Nancy Travis and Allen as mom and dad in a fairly typical TV family, aired for six seasons on ABC, from fall 2011 to spring 2017 when it was canceled.

The cancellation was somewhat of a mystery because in its sixth and final season on ABC, the sitcom was averaging more than 8 million viewers for each new episode -- an average any network would love to have for any of its shows.

Speculation held that ABC (Disney) grew to dislike this sitcom with a conservative slant, even though the opinions expressed by the Allen character on this show were decidedly mild.

Based on the ratings the show scored consistently on ABC, and also perhaps sensing an unfilled niche for at least one conservative character in a prime-time network comedy, Fox decided to revive the show.

As a result, it returns to TV on Friday night to begin its seventh season, well over a year since a new episode was last seen on ABC.

It likely also helped the decision-making process that “Last Man Standing” is produced by a Fox-owned studio, 20th Century Fox Television, and that the show has already reached the requisite number of episodes to be sold in rerun syndication.

The move of a TV show jettisoned by one network to another network is exceedingly rare in the TV biz, although by coincidence, there is another one this season -- “Brooklyn Nine Nine,” which Fox canceled and NBC picked up for midseason.

In the Fox premiere of “Last Man Standing,” Allen and two of his co-stars spend the first two minutes elaborately acknowledging their show's move to Fox.

In the opening scene, they all have a laugh about a show they are trying to find on television that apparently switched to another network. Once they find it, they all agree that the show suddenly seems better than it used to be.

As if the point needs to be driven home even further, there is another remark on this same subject in the show's final scene, when the Allen character addresses the audience directly as part of one of his signature vlogs.

This particular vlog is a recap of what transpired earlier in the show, which depicted deep divisions in the family over political issues.

These divisions will be recognizable to one and all, except that in this sitcom, there is a resolution to the ongoing conflicts and a coming together of everyone involved.

This is hardly what is happening here in the real world, but Fox might be guessing correctly that viewers want to see conservatives and liberals argue and then unite as a family -- even if it's only make-believe.