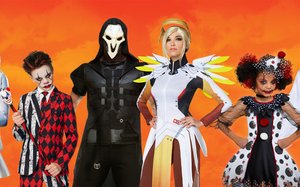 Americans are looking forward to a scary October, with the National Retail Federation forecasting that Halloween spending will reach $9 billion, the second-highest level in the survey’s 14-year history. (Last year, it predicted spending of $9.1 billion.)

And retailer Spirit Halloween says it expects Fortnight video-game inspired costumes, unicorn get-ups and variations of Stephen King’s “It” clowns to be ringing doorbells around the country.

The NRF study, conducted by Prosper Insights & Analytics, estimates that those celebrating the spooky day will spend, on average, $86.79 per person, up from $86.13 last year. And the survey, based on 6,900 adults, forecasts that at least 175 million Americans plan to celebrate somehow.

About 68% of Halloween shoppers say they intend to buy costumes, for themselves, their kids and -- especially this year -- pets, which translates into predicted spending of $3.2 billion.

Another $2.7 billion is likely to be spent on decorations, with 74% of shoppers making those purchases. And of course, candy is critical, with 95% of respondents saying they’ll stock up, spending an aggregate of $2.6 billion. Some 70% say they’ll be handing treats out at their front door.

Spirit Halloween is predicting a Fortnite frenzy, with favorite skins including Crackshot, Dark Voyager and Black Knight. (It’s also got plenty of costumes from games like Halo, Assassin's Creed and Minecraft.)

The NRF’s costume predictions are a little tamer. It says the most likely choices among kids are a princess, superhero or Batman. And among adults, witches are (of course) the most cited, followed by the ever-popular vampires, zombies and pirates.

Pet costumes continue to gain favor, with 18% of survey respondents saying they plan to dress up cats and dogs. (Last year, it was 16%.)

Top canine and kitty costumes, according to the NRF? Pumpkins, hot dogs and bumble bees.