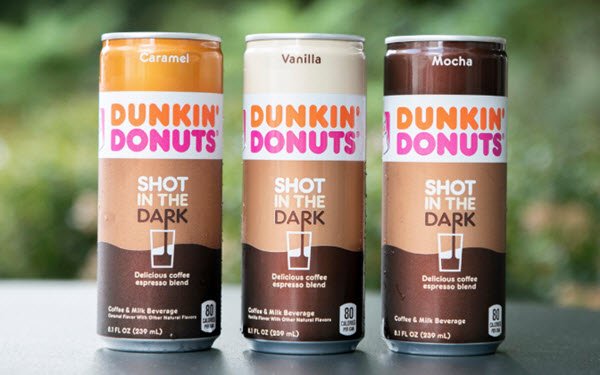 Dunkin' has now made it official: It will shed the "Donuts" half of its name at year's end, to reflect its emphasis on coffee and other beverages, as well as its expanding on-the-go food options beyond donuts. The diversification of Dunkin's business model is also evident in its newest product launch at retail: its first line of coffee drinks in a can.

Called Shot in the Dark, the products are also the latest manifestation of the boom in the ready-to-drink (RTD) coffee category.

Like Dunkin’s successful line of bottled RTD iced coffees, launched in early 2017, the new beverages -- coffee/espresso blends with “a touch” of cream and sugar -- are being manufactured and distributed by the Coca-Cola Company. Coca-Cola, too, is pushing harder than ever to diversify into growth categories, as the soda category struggles to keep its head above water (and flavored seltzers, and RTD coffees and teas).

The new blends, which come in caramel, mocha and vanilla flavors, are designed to accommodate the tastes of consumers who “want something a little bolder than a traditional cup of coffee, but not as strong as a shot of espresso,” according to Brian Gilbert, Dunkin’ vice president, retail business development.

The blends come in small cans, reflecting their concentrated caffeine content. The caramel variety has 134 mg per 8.1-ounce can, versus 150 mg in a 10-ounce cup of regular Dunkin’ brewed coffee. (A tagline for the new products: “This is what awake tastes like.”)

Currently available in a limited number of retailers, they will roll out to grocery and convenience stores across the country during 2019.

Dunkin’ and Coca-Cola are also building on the RTD iced coffees’ success by jumping on another seemingly unstoppable trend: pumpkin-flavored everything. Starbucks may have set off the craze back in 2003 with its still-thriving, seasonally available pumpkin spice latte, but Dunkin’ is now in the game with a pumpkin spice iced coffee, available at retailers across the country as of this month. The line's iced coffees also include original, mocha, espresso, French vanilla and cookies & cream flavors.

While roasted coffee is still the largest segment in the coffee category (with a 39.2% market share), RTD is the fastest-growing segment, with 31% growth over the past two years, according to Mintel.

Its growth is being driven in part by older iGeneration consumers (those currently 18 to 23), who are more likely to drink RTD coffee than brewed coffee, indicating this is how they are entering the market, reports Mintel.

In addition, counterintuitive as it sounds, 42% said that their ideal bottled or canned cold coffee drink would help them relax.

Total U.S. coffee sales are projected to grow 4% in 2018 to reach $14.4 billion, with steady growth expected to continue through 2023. Stats worthy of National Coffee Day, which is nearly upon us (coming Sept. 29).