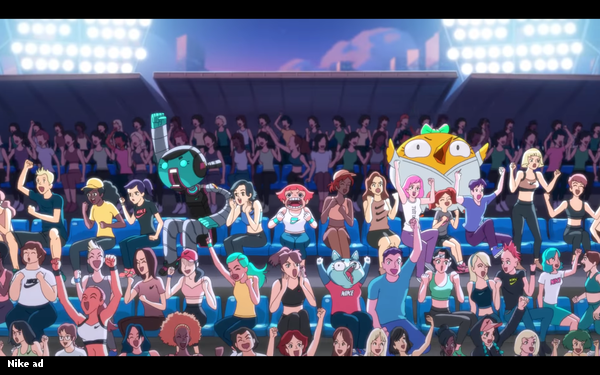 It’s been a buzzy week in Sneakerville.

Nike posted sales and earnings that beat expectations, with its CEO telling investors the controversial Colin Kaepernick “Just Do It” campaign is driving record levels of engagement.

And Under Armour, which has been without a marketing leader for almost a year, turned to fashion, not football, for its new Chief Marketing Officer, hiring Alessandro de Pestel away from Tommy Hilfiger Global/PVH Europe.

More eyes than usual are focusing on the Nike earnings report, eager to see what impact the new campaign might have on its financial performance. But observers who hoped the use of the divisive Kaepernick would hurt Nike sales seem to be out of luck. The Beaverton, Ore.-based company beat expectations in most metrics, with revenues climbing 10% to $9.9 billion, and sales for the Nike brand rising 10% to $9.4 billion.

Sales at company subsidiary Converse also advanced, up 7% to $527 million.

Nike digital sales jumped 34%, and it says sales of women’s clothing benefited from increased demand for sportswear and bras, which it attributes to its recent push to combine style with comfort.

Spend devoted to what the company labels demand creation, which includes its advertising budgets, grew 13% to $964 million, driven by sports marketing investments and brand campaigns.

In a conference call with investors following the announcement, CEO Mark Parker said the Kaepernick campaign is creating “record engagement with the brand,” according to the Seeking Alpha transcript of the call. “We feel very proud of the work that we’re doing with ‘Just Do It’….it’s driving a real uptick in traffic and engagement, both socially as well as commercially.”

Nike, which had been struggling in North America, has been on a roll in recent quarters, and analysts continue to be upbeat about its prospects as it continues to emphasize personalization, higher-end items and digital offerings.

The company “continues to see unprecedented demand for its premium product through its SNKRS app, which has become the world's #1 footwear shopping app, despite not being available globally,” writes Lauren Cassel, an analyst who follows Nike for Morgan Stanley.

She continues: “We believe Nike is in early innings of transitioning from a traditional wholesale business to an emerging retail technology company... positioned to take share in the high-growth, global activewear market as well as increase profitability, which should make it one of the highest growth consumer names and one of the few to benefit from the shift to e-commerce.”

Under Armour’s announcement about de Pestel ends almost a year of speculation. Global CMO Andrew Donkin left last November after just 15 months in the job, as did Pam Catlett, senior vice president and general manager of women's and youth. And industry publications have said that Adrienne Lofton, senior vice president of global brand management, is headed to rival Nike.

Last week, Under Armour updated investors on its turnaround plan. It now expects to cut an additional 400 jobs, with losses for the full year projected to hit $60 million.