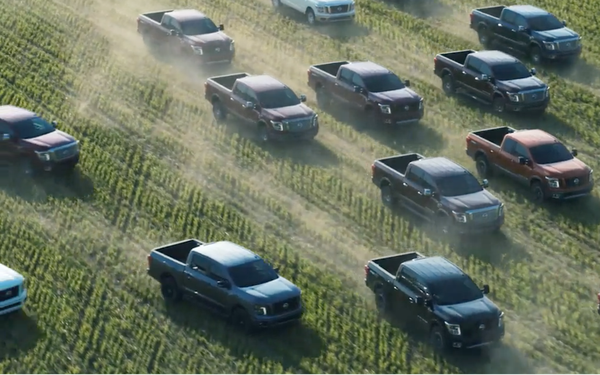 On sale this fall, the Titan and Titan XD will be on display through Oct. 21 at the Fair Park in Dallas.  DePerez says it is Nissan’s “most refined truck yet.”  It features advanced technology, new safety features and a new audio system.

DePerez provided media with a look at the first official TV spot in the purpose-driven “Calling All Titans” campaign from Zimmerman Advertising.

As first reported in Marketing Daily earlier this month, the spot features the song “Whatever it Takes” by Imagine Dragons.

Producer and director Shawn Levy, known most recently for his work in the hit Netflix series "Stranger Things," led the commercial.

The 60-second spot shows Titan owners engaging in volunteer efforts for the American Red Cross, Habitat for Humanity and the National Park Foundation.  The voiceover, which includes dramatic imagery of disaster and subsequent rebuilding, states “A truck can’t change the world, but a titan can. … So at Nissan, we build trucks for titans. American needs more titans. You’ve got work to do, and we’ve got your truck.”

Nissan has been focusing on its technological capabilities for the automaker’s overall brand messaging, and this effort helps humanize the “amazing” capabilities of what the truck actually does, Jeremy Tucker, vice president, marketing communications and media, Nissan North America, told Marketing Daily earlier this month.