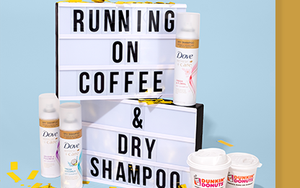 Give Dove and Dunkin' credit for dreaming up the kind of promotional combo busy women live for: The two brands are offering women the chance to earn a year’s supply of coffee and dry shampoo.

Linked to National Coffee Day on Sept. 29, the promotion kicks off with a social media contest, asking women around the country to post a photo of their busy morning on Instagram or Twitter and tell the brands why they run on Dunkin' coffee and Dove dry shampoo, with hashtags #DoveXDunkin and #DxDSweepstakes.

And on Oct. 1, the brand duo are brewing a pop-up event in New York City, offering a free coffee along with a mini-styling appointment, as well as giveaways like tote bags, hair ties and travel cups.

While the promotion fits nicely with the coffee chain’s “America runs on Dunkin'’’ messaging, it’s quite a departure from Dove and its earnest “Real Beauty’ positioning.

"Social media has exploded with women sharing how coffee and dry shampoo are their secrets to getting up, out and on with their day, taking them from the gym to the carpool to the boardroom,” says Piyush Jain, vice president of hair care for Unilever, in its announcement. He calls the campaign an “unlikely but perfect pairing.”

It also seems to be the first promotion undertaken by Dunkin’ using its new, shorter name, as it begins to roll out the Donut-less moniker. The name change is scheduled to become official in January.

The campaign seems aimed at millennial women, not just because they love social media and coffee, but because they are also big fans of dry shampoo. Market research firm Mintel reports that dry and no-rinse shampoo products are much more popular with younger consumers (at 21%), aged 18-34, than the overall sample (at 12%.)