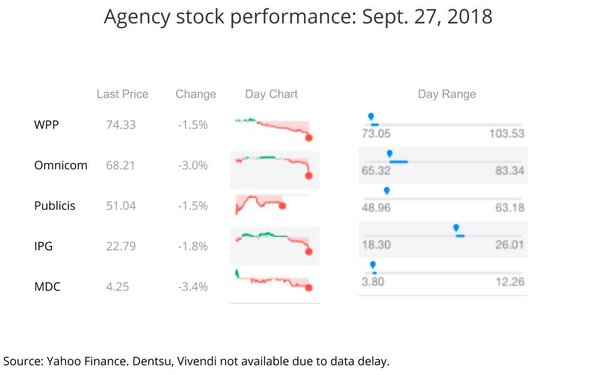 Shares of the major agency holding companies took a hit after news broke Thursday that federal prosecutors are investigating their media-buying practices.

Data for Havas parent Vivendi and Dentsu Aegis Network parent Dentsu was not available due to delays in reporting, but MDC Partners and Publicis took the biggest percentage decrease, though Interpublic and Omnicom had the highest volume in terms of share trades.

“Our view is that the probe is likely to focus specifically on the digital parts of media buying, and not the wider space, and especially around how rebates have been given. In the short-term, it is likely to be another reason for investors to avoid the agency space,” Liberum analyst Ian Whittaker wrote in a note to investors this morning.

Whittaker explained the probe likely will center on digital media-buying practices, because of the role automated rebates have been playing in programmatic buys, “which is a very opaque space, rather than the wider media-buying space (such as TV, etc.).”

That said, Whittaker noted that the outcome of the investigation could have a material impact on agency profit margins, given the fact that media services are one of the most profitable areas of their business. He estimates media accounts for 45% of WPP’s and 40% of Publicis’ profits, as an example.