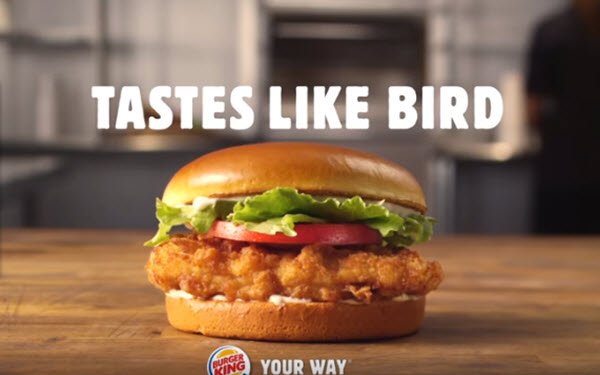 In its latest mischievous TV spots, Burger King’s creative team is satirizing the creative limits of artificial intelligence and going for laughs, while still working in the usual craving-driving close-ups of Whoppers and other menu items.

The QSR set the stage with a news release announcing that it’s launching the “first ads entirely created by A.I. to air on national television,” created by feeding “thousands of fast-food commercials and competitive reports from industry research” into a “new deep learning algorithm” that “essentially simulates how a human brain operates.”

Hundreds of unique commercials were created and tested with focus groups, we’re told. “By tapping into A.I. to create a new advertising campaign, the brand is developing an innovative business model called Project: AOR, moving from the traditional Agency of Record to an Agency of Robots.”

At first read, enough to make agency creatives want to crawl into bed and pull the covers up over their heads.

But wait: The release also includes a link to the ads — which when viewed, turn out to be filled with hilarious non sequiturs and nonsensical dialogue. Can it be any coincidence that the ads are scheduled to begin airing on prime-time cable Oct. 1, the first day of Advertising Week?

All of the four TV spots, from David Miami, start with a screen title announcing: “This ad was created by artificial intelligence.”

One 15-second ad then goes on to offer food-porn shots of the Whopper, while a robotic-sounding voiceover declares: “The Whopper is back. It never left, but it’s back. Flame-grilled, just like you, with vegetables fresh and flying, just like you. The Whopper lives in a bun mansion, just like you. Order yourself today. Have it Uruguay. BK logo appears.”

Another takes the same approach to BK’s chicken sandwich, with the voiceover declaring: “The chicken crossed the road to become a sandwich. Burger King encouraged the chicken. Made with white-meat chicken. Bed of lettuce for you to sleep on. Bed of mayonnaise for extra sleep. The chicken sandwich from Burglar King. Tastes like bird. BK logo appears.”

A third starts by asking, “Is it bird? Is it plane? It was bird. Now it’s chicken fries…”

The last, a 30-second Whopper ad (below) that defies explanation, mocks the “creepy” Burger King mascot, as well as the QSR advertising cliché of portraying friends and family acting ludicrously happy as they scarf down fast food.