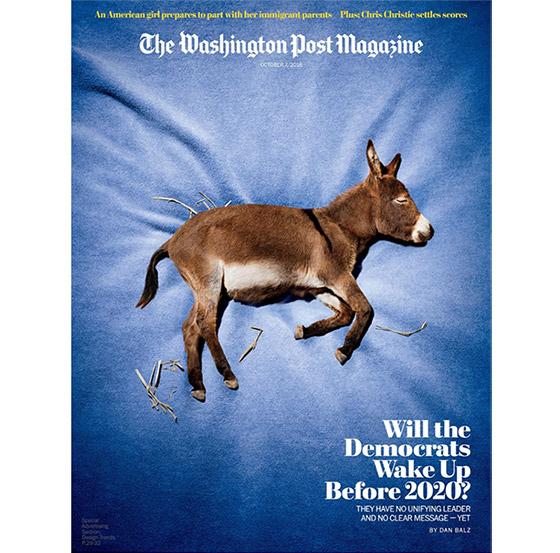 “With this redesign, we are aiming to bring more journalistic creativity to the magazine’s front section and to create a look — both in print and online — that is adventurous and elegant,” stated Richard Just, editor of The Washington Post Magazine.

“Opening Lines,” for example, is a new section featuring two, short-form stories leading off each issue. It will highlight some of the offbeat and quirky characters, events, trends and conflicts around Washington.

The table of contents will now be illustrated each week by one of eight artists that will rotate throughout the year.

“Our long-form pieces will now have a distinctive online design — one that is visually connected to the rest of The Washington Post, but also gives the magazine an identity of its own,” Just added.

The first issue of the relaunched magazine will appear in print this Sunday, October 7.

The cover story, from The WashingtonPost's chief political correspondent Dan Balz, looks at the internal challenges of the Democratic Party as it barrels towards the 2020 presidential election year.

New editorial features in the updated Washington Post Magazine include a column by Helena Andrews-Dyer called “Star Power,” which will look at the intersection of Washington D.C. and pop culture.

An illustrated feature called “Tangent” will take a recent political or cultural moment and draw connections with other historical events.

“Let’s Talk” will feature the writer behind a recent Post Magazine story interviewing a reader who posted a critical comment on the article.

And “Just Asking,” The Washington Post Magazine's weekly Q&A, will expand to a full spread with more photography.

“Working World” and “Dilbert” are now in The Post's Sunday Business section.