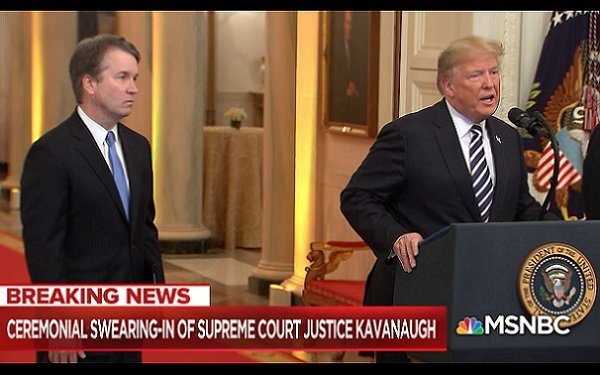 The story of Brett Kavanaugh’s confirmation to the U.S. Supreme Court had its final scene Monday evening in a televised swearing-in ceremony at the White House.

The battle that preceded this ceremony was so brutal and intense that it is a wonder Kavanaugh -- and indeed the nation -- ever made it to a swearing-in.

Those directly involved in it are no doubt battle-weary in its aftermath. But so are the rest of us.

Whether you watched the coverage religiously or sporadically over the summer and into the early fall -- from the dramatic hearings to the hours and hours of partisan commentary on the news channels -- TV had a way of amplifying everything, making it all seem angrier and more divisive.

Or did it? One of the continuing questions about TV is always the one about the chicken and the egg. Was the anger already there, or did TV fan the flames and create the anger?

Or to put it another way: Does TV drive events forward and therefore, in cases such as this Kavanaugh story, manufacture the heat that ignites and grows hotter with each nightly debate and new event?

Or does TV merely act like a mirror on our society, reflecting the passions that are already abundant and already being expressed?

Once upon a time, TV news and TV shows all seemed to come under the latter question. TV comedies and dramas followed social trends, being careful not to actually establish them.

TV news once did the same back in the dark ages of network-only television when the “news” on TV was strictly a recitation of events that had happened earlier in the day.

Now the concept of news, particularly how it is consumed on the partisan news channels and on social media, encompasses opinions as well as facts. However, when opinions are positioned alongside facts, the facts become diluted or lost.

How many times have you watched the talk shows on MSNBC and Fox News Channel on any given evening and thought to yourself: I wonder what's really going on? The hosts and guests on these channels see every issue so differently that they may as well be on different planets.

That too could be a reflection of the divisions that are already apparent in our society. Or it could be playing a role in establishing those divisions.

On the significance of the noise emanating from the news channels, it is instructive to remember that the total audience for the news channels -- well under 10 million viewers all told during prime time -- is but a small fraction of the U.S. population (estimated at 325 million people).

Still, the news channels and other opinion media give off enough heat to make it seem sometimes like they are more important than they really are.

For one thing, they seem more and more to be operating within a narrow echo chamber in which the talk show hosts and pundits are talking primarily to the relatively small community of politicians and other journalists.

For those on the outside watching them, it is all just so much political theater or even reality television (which happens to be the world from which the current president launched his political career).

What is real and what is imagined? What is fact and what is fiction? Increasingly, in ways large and small, TV is blurring them all together.

What's really going on? In this day and age of hyper-news and instant opinions, who knows?