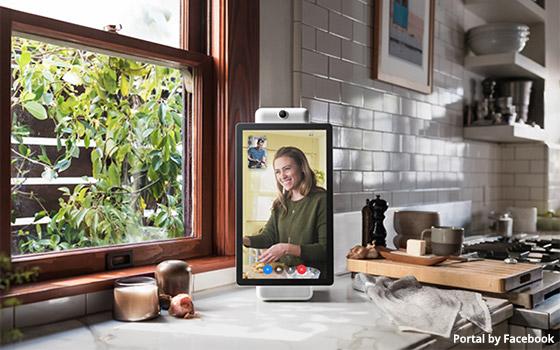 Placing its first big bet on hardware, Facebook just unveiled the Portal and Portal+ – a pair of multipurpose smart screens for the home.

By syncing with users’ Facebook Messenger accounts, the gadgets’ foremost function is video chatting with friends and family. These are not your average video monitors, Mark Zuckerberg assured on Monday.

“Portal uses an AI-powered Smart Camera and Smart Sound technology to focus on whoever is talking, even across a room,” Facebook’s cofounder-CEO boasts in a new blog post.

Thanks to partnerships with Amazon, Google, etc., the screens will mirror the functionality of the Echo, Google Home and other voice-responsive smart speakers.

Indeed, users will be able to initiate a video call simply by saying “Hey Portal” and their desired contact.

Facebook is also hoping users will take advantage of the screens’ ability to stream all manner of content from various sources, including Facebook Watch, Spotify Premium, iHeartRadio, Food Network and Newsy.

For $199, the Portal features a 10-inch screen; for $349, the Portal+ boasts a 15-inch pivoting display. Both models were available to pre-order as of Monday from Facebook, Amazon and Best Buy. They are expected to begin shipping next month.

Encouraging consumers to fill their whole house with Portals, Facebook is offering a $100 discount when they purchase more than one screen.

For Portal to succeed, however, Facebook knows it will need to overcome a trust gap that has emerged between itself and many users.    To do so, the tech titan is playing up Portal’s security and privacy features, including the ability to completely disable the camera and microphone with a single tap.

The Portal and Portal+ also come with a camera cover, which might make potential users feel more comfortable about bring them into their homes. To manage Portal access within their home, Facebook also suggests that users set a four- to 12-digit passcode to keep their screens locked.

Painting the picture of safe and secure product, Zuckerberg noted that he has been testing the Portal with his own family.

“Our girls use Portal to call their grandparents before bedtime, so they can read books together,” he shared on Monday. “Our girls don't use a lot of screens yet, but we’re happy for them to do video calls to see their grandparents or so I can see them when I’m traveling.”

In the wake of several major privacy scandals, Facebook says it wants to be upfront about the information Portal collects, and how it plans to use this information.

Facebook stressed on Monday that it doesn’t listen to, view, or keep the contents of users’ Portal video calls.

In addition, Facebook says video calls on Portal are encrypted, while Smart Camera and Smart Sound use AI technology that runs locally on Portal -- not on Facebook servers.

The social giant also noted on Monday that Portal’s camera doesn’t use facial recognition or recognize the identity of users.

This year, the smart home devices market will grow 31%, according to a recent forecast from International Data Corporation (IDC).

That will amount to roughly 644 million devices shipped before the end of the year, if IDC is on target.

By 2022, the research firm expected that figure to reach 1.3 billion, which would represent an annual growth rate of 21%.