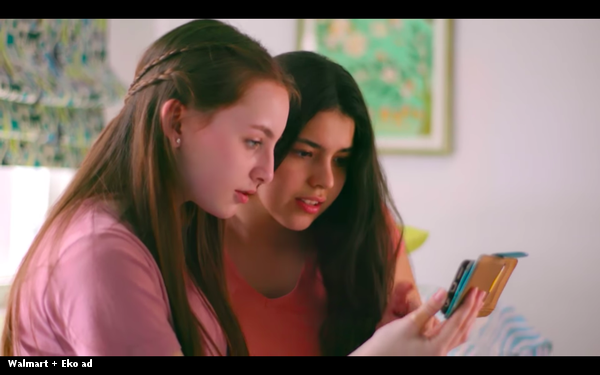 In its ongoing push to out-Amazon the competition, Walmart says it has formed a joint venture with Eko, an interactive video company.

It also announced a partnership with Pay Pal, developing financial products and services.

And it is reportedly patenting shopping cart handles that allow it to collect biometric information on shoppers, including detecting stress levels via heart rates.

With Eko, the Bentonville, Ark.-based company intends to develop original content that is interactive, enabling it to engage with customers in new ways, including cooking shows and interactive toy catalogs. (It already has the digital platform VUDU, and recently launched Walmart eBooks, with Rakuten Kobo.)

Walmart, which has previously invested in the company, says it is participating in the next funding round for Eko, which has also gotten backing from the likes of Samsung, Sequoia Capital, Intel Capital, and Warner Music Group.

The retailer also took the wraps off a new partnership with PayPal that is likely to be a boon for the millions of unbanked American consumers: For the first time, Pay Pal mobile users can now take cash out of their accounts in a brick-and-mortar setting.

For a $3 fee, the arrangement also allows PayPal MasterCard customers to make cash withdrawals at Walmart Service Desks, ATMs and cash registers for the first time. “We consider this a key collaboration for both PayPal and Walmart,” says Dan Schulman, PayPal’s president and CEO, in the announcement.

“We are committed to working together to make it simple and easy for people to use PayPal cash in and cash out money services at every Walmart location in the U.S,” he adds.

Walmart is also exploring new ways to improve customer experience, with CBInsights reporting the company has applied for patents for biometric shopping handles, which measure heart rate, temperature and stress levels. Spotting shoppers in distress would alert associates in the event of a medical emergency, and also give the store data on problem aisles and areas.

Walmart’s effort to sharpen its edge in all channels isn’t going unnoticed. Deutsche Bank recently upgraded its recommendation to “Buy,”  “as the retailer is reaping returns on the many years of investment in e-commerce and customer service,” writes Paul Trussell, retail analyst for Deutsche. “We believe the company is now in position to accelerate market share gains in grocery,” pointing out its recent results showed the chain’s best grocery results in nine years.

“We believe Walmart is best positioned to continue to take both mind and market share going forward,” he writes. “Walmart is the second largest online grocery player in the U.S., which we estimate accounted for about 11% of the market in 2017 and, importantly, we believe the retailer could surpass Amazon by end of 2018.”