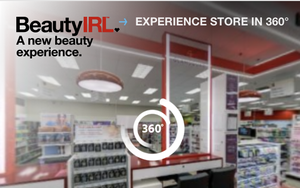 Many women’s first experience with beauty products occurred in drugstores, which may not be a glamorous memory. Those who’ve moved on to department stores or Sephora for most of their make-up needs may find buying in drugstores has all the panache of buying cough medicine a few aisles over.

The new CVS BeautyIRL store-within-a-store is trying to upgrade that experience by introducing more salon-style services and sleek design at its flagship stores located in New York, Massachusetts, Connecticut and Florida.

To drive home the point that something different is going on, CVS enlisted OmniVirt,  the VR/AR ad platform, which designed an interactive  360-degree look at the new stylized cosmetics department. The ads feature hot spots consumers can click on for a better look at the array of goods.

That includes a closeup of the services from Glamsquad, the on-demand beauty service that makes house, office and hotel calls in a few big cities that will also have a presence at CVS stores.

The in-store application is a new one for OmniVirt, which has been used to show off real estate or travel destinations, automobiles like Nissan and Toyota and behind-the-scenes promos for Netflix, Universal and NatGeo. A while ago on Pinterest, OmniVirt worked with Home Depot to create a panoramic view of rooms in a home that used products from the stores in DIY projects.

The idea of 360-degree or virtual reality videos in advertising isn’t yet common. “It’s novel,” says Ara Parikh, the product marketing manager, “but it’s not a novelty because more and more people see it’s effective and powerful.”

The company’s own study says completion rates for 360 degree videos are 46% higher than for regular videos, and  86% of users interact with the videos. Visitors wander around for an average of 31 seconds, which would seem to be a salient detail — since CVS undoubtedly would like consumers to wander around BeautyIRL, too, one way or the other.