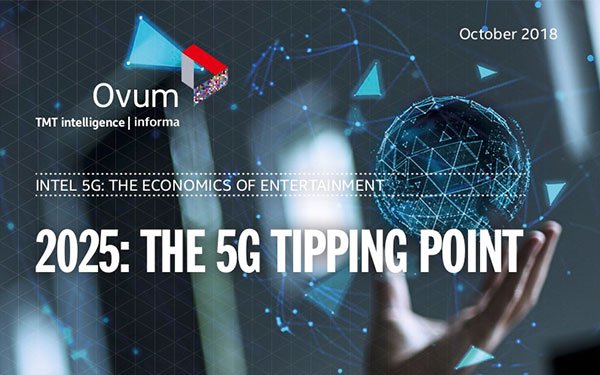 Over the next decade, media and entertainment companies will compete for a share of a nearly $3 trillion cumulative wireless revenue opportunity, according to a new study.

Nearly half ($1.3 trillion) the experiences will be accounted for by 5G networks, according to the “5G Economics of Entertainment Report” conducted by Ovum for Intel.

By 2025, more than half (57%) of global wireless media revenue will be generated by the high-bandwidth of 5G networks and the devices that run on 5G, states the report. Due to low latency of the new networks, live streaming and large downloads will happen instantly.

“5G will inevitably shake up the media and entertainment landscape,” stated Jonathan Wood, general manager of business development and partnerships, 5G next generation and standards at Intel. “It will be a major competitive asset if companies adapt. If not, they risk failure or even extinction. This wave of 5G transformation will not be the purview of any singular industry.”

Content consumption -- including mobile media, mobile advertising, home broadband and TV -- will be accelerated and experiences improved across a broad range of new immersive and interactive technologies, such as augmented reality, virtual reality and new media, according to the report.

By 2028, video will account for 90% of all 5G traffic, and immersive and new media applications will generate more than $67 billion annually, according to the study.