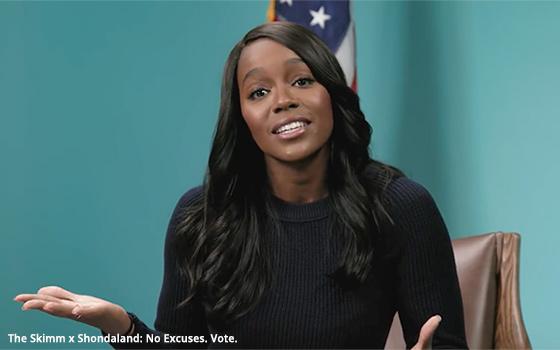 In early September, theSkimm announced the launch of its No Excuses campaign, a nonpartisan effort to get 100,000 people to vote in the midterm elections this coming November. Earlier this week, in a partnership with Shondaland, a five-part video series connected to the campaign launched across both outlets.

A new #NoExcuses video series features stars from Shondaland’s television properties, such as Grey’s Anatomy and How to Get Away with Murder.

The first episode, which covers absentee ballots, features Conrad Ricamora and Kevin McKidd. It became available on Shondaland.com and the Daily Skimm newsletter earlier this week.

Separately, Shondaland.com has named a new editor-in-chief, former Elle editor Robbie Myers. Shondaland.com launched about a year ago, first as a newsletter for fans of Rhimes and her work. Since then, it has expanded into pop-culture coverage and essays, along with content meant to inspire women to live their best lives.

As reported by WWD, Rhimes is interested in turning the site into a larger destination and extension of her brand. She felt Myers was the perfect fit for this role, citing her “commitment to culture, inclusive perspective and fearless passion for storytelling.”

Myers was with Elle for nearly 18 years before departing in September of last year. She was replaced by Nina Garcia.

At Shondaland.com, which, like Elle, is a Hearst property, Myers will oversee all editorial content and strategy. She will report to Rhimes.