Acorn TV: You Want Accents? We Got Accents! 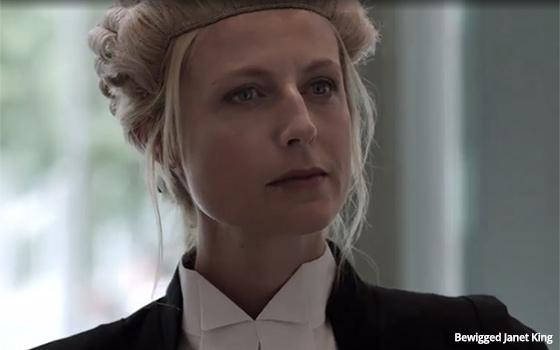 “So what do you want to stream?” I ask my husband on one of those “I’ve got 900 channels but nothing to watch!” nights.

In fact, it’s a meandering stream of connections that lead you from one show to another these days — from word-of-mouth recommendations to, sometimes, The New York Times’ "Watching" column.

I did miss that show, so I turned to the eponymous King, a “tenacious prosecutor” who’s also “a lesbian mom with two young children, a situation that’s treated with refreshing matter-of-factness.”

As with “The Good Wife,” legal dilemmas are the heart of “Janet King,” although with more of a focus on police action and mystery-solving. Each of the three seasons (eight or nine episodes apiece) is driven by a central case of murder or conspiracy.

But what could be a typical courtroom-whodunit show is elevated by the performance of Marta Dusseldorp as cool, clear-eyed, full-of-integrity Janet, and Hamish Michael as the hapless, endearingly goofy Richard, Janet’s colleague.

Still, after streaming two seasons, I began to tire of the show’s overcomplicated, sometimes illogical plots. That’s when I moved to its prequel, Acorn’s “Crownies,” where the mood is lighter, with more humor and a focus on a younger ensemble cast, though happily, Dusseldorp shows up, too.

For me, each show’s Aussiness (Ozziness?) is central to its appeal: those wonderfully terrible wigs Janet and others wear in court (see above); and the view into another country, where most cultural references are eerily like our own.

And, of course, there are those enjoyably quirky (to my ears) Aussie accents!

Hearing a full range of Brit-related speak was part of Acorn’s appeal for my friend Ann, a purist cord-cutter who previously subscribed only to Netflix and Amazon Prime.

Acorn promises “world-class TV from Britain and beyond” — and Ann especially likes “shows that are not toned down for the American market, with regional accents and unexplained British cultural references.”

She Googles explanations for puzzling Brit stuff on her phone while streaming Acorn on her computer or iPad, and turns on closed captioning or subtitles so “I can boldly go into the Midlands, Wales, Scotland and Ireland and not worry about understanding the accents.”

In Ann’s favorite genres — cops/lawyers/mysteries — the Acorn “standout” is “No Offense,” set in Manchester and “raunchy in a specifically British way, tough and coarse like the Midlands area of its setting,” she notes.

Other recommendations include “Striking Out,” set in Dublin, and “Loch Ness,” a long-form mystery set in “you guessed it, Scotland.”

“Hidden,” in the Welsh language with subtitles, features “a rather familiar serial-kidnapper/rapist plot, but the acting is top-notch.”

Ann also likes “Mystery Road,” an Australian show starring Judy Davis (who has appeared in many U.S. TV shows and movies) that features aboriginal actors in starring and supporting roles.

Ah, yes, back to the joys of Aussieland. When I caught my husband watching the recent FX show “Mr. Inbetween” — about a hitman — I was first put off by its mix of violence and absurd humor. Then I began listening to the character’s speech patterns and felt back on familiar turf, comforted by, yes, my new favorite accent.

And here’s a tidbit about Aussie food culture: In one tense scene, the characters — the hitman and an undercover cop about to be found out — kept mentioning a craving for “dimmies,” which we finally Googled during a commercial. “Dimmies” is an abbreviation for dim sum!

Hey, mate, you may kill for a living, but you’ve got good taste in Chinese food.