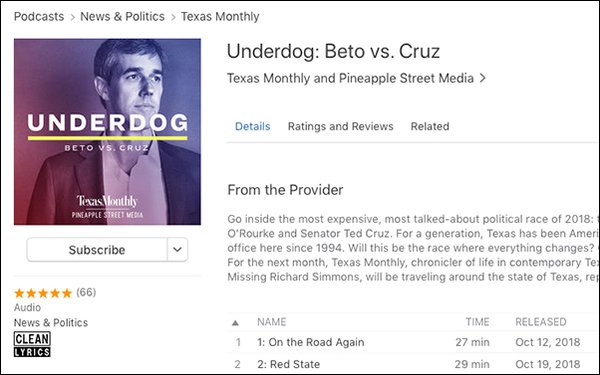 GQ and Texas Monthly announced the launch of new podcast series, both covering the lives of influential people.

The race is one of the most contentious and talked about nationally.

As O’Rourke fights to turn a red state blue, Texas Monthly editor Eric Benson is traveling with his campaign, giving listeners an intimate view of his campaign.

The publication will also give voice to operatives, analysts and pollsters, while talking to Texas voters who will ultimately decide this pivotal race.

The first episode was released on October 12and a new episode will post every Friday.

GQ launched “Mad Influence,” which features deep dive conversations with influencers and celebrities about critical points in their careers. The series in presented by sponsor Moet and Chandon in collaboration with At Will Media.

The series will also cover luminaries from music, food and more, with episodes featuring Debbie Harry and Chris Stein of Blondie and restaurateur David Chang.

The first two episodes of the season are currently live.
magazines, podcasts, politics
Next story loading