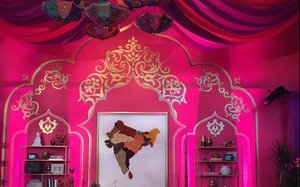 Neiman Marcus may be facing financial troubles, but that isn’t stopping the famed retailer from doing its best to make this year’s holidays fantabulous.

The new Christmas Book includes a customized 74-foot solar yacht ($7.1 million) and an unforgettable tour of India, Nepal, Bhutan and the Maldives, with a private jet, five-star hotels and occasional glamping ($630,000).

For $200,000, have your favorite animal or family pet cast in bronze by Danish sculptor, Bjørn Okholm Skaarup, best known for his more than 15-foot-tall bronze Hippo Ballerina on display in New York City's Lincoln Center. (That gift includes a tour of the sculptor's foundry in Florence, Italy.)

The Dallas-based retailer unwrapped the gift catalog in New York, as part of its six-month countdown to the new Neiman Marcus store slated to open in Hudson Yards in March.

Billionaires don’t get to have all the fun: There are Dolce & Gabbana Sicilian-inspired toasters or blenders, $850 each, or a $395 transparent electric guitar. And the retailer says that almost half of the gifts in the 275-page catalog are less than $250, like the $78 king-and-queen salt-and-pepper shakers from Jonathan Adler. There’s even a handful priced at $20 and under, including a set of eight honey spoons for $16.

Other fantasy gifts include a Tennis Majors Tour hosted by tennis champ Sloane Stephens and featuring trips to four Grand Slam tennis matches ($555,000).  Consumers can also go shed shopping, and buy the Vice and Virtue houses, $250,000 each. The Virtue House, a 10' x 12' backyard retreat, is designed to “feed the soul,” and is “brimming with natural light and rose quartz.” The Vice House? The same level of privacy, but custom-designed for everything from Cornelius & Anthony cigars, 50-year-old whiskey and the ultimate gaming experience.

The catalog also continues the tradition of giving back, with some proceeds going to the Heart of Neiman Marcus Foundation, which it says helped 2.3 million kids last year. It also supports the Boys & Girls Clubs of America, pledging $750,000 over three years.

Underneath the splashy gifts, though, times aren’t the merriest at Neiman Marcus right now. In its most recent quarter, it posted a loss of $75.3 million. And Bloomberg recently reported that the retailer has started talks with creditors about reworking a $2.8 billion loan, due in two years. In exchange for more time to repay the debt, the report says, creditors get more power if Neiman’s fortunes take a turn for the worse.