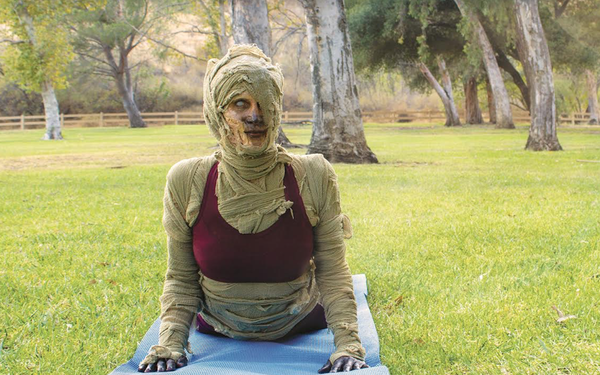 Farmers Insurance is getting into the Halloween spirit by using ghouls to promote life insurance.

The company hopes people put aside their apprehension and fears, using Halloween as a fitting occasion to proactively explore the topic of life insurance.

The campaign, from RPA Advertising, consists of 30-second, 15-second and 6-second videos depicting classic Halloween characters—from a power-walking zombie, to a yoga-practicing mummy, to a night-hiking vampire—“living their best afterlives.”

The videos will live online in digital placements, along with social content running on Facebook and Instagram. The campaign will run through the end of October, culminating on the spookiest night of the year.

The effort is an extension of Farmers’ larger “We Know From Experience” campaign, building on the brand’s  strategic focus on cultural moments when people are especially engaged. Most recently, Farmers created campaigns around movie award season, seasonal winter games, and a momentous wedding.

This isn’t the first time the company has riffed off Halloween, says Jenny Howell, Farmers Insurance director of advertising.

“Last year we created The Stranger Claims, a spooky digital campaign which launched on Friday the 13th,” Howell says. “It featured an immersive 360-degree virtual experience in which people could explore some of the strangest, creepiest and seemingly supernatural insurance claims seen and covered by Farmers.”

Halloween is actually a really good time to talk about life insurance.

“Life insurance can be a scary topic for people to think about,” she says. “The celebration of Halloween gives us the opening to talk about the need for life insurance in an entertaining and straightforward way: using undead creatures to urge people to ‘rest in peace of mind this Halloween.'"