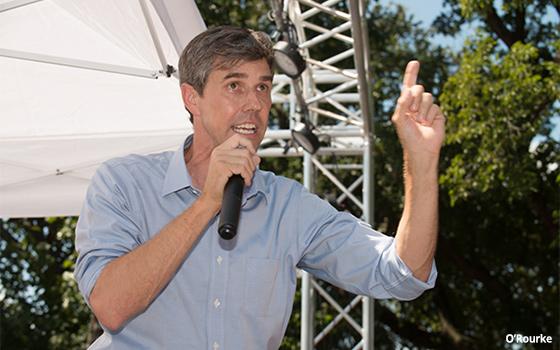 The U.S. Senate campaign of Texas Democrat Beto O’Rourke has been hit with a lawsuit for allegedly sending people unwanted robotexts.

Collin County, Texas resident Sameer Syed alleges in a class-action complaint that he received at least 9 text messages from the campaign for O'Rourke, who is challenging Republican incumbent Ted Cruz for Senate. O'Rourke's campaign. He says the messages were all from different phone numbers, and that he wasn't able to return any of the calls.

“When plaintiff called the phone numbers that Defendant’s text messages came from, all calls resulted in error messages or disconnected dial tones,” he alleges in a complaint filed Friday in federal court in Dallas. “This illustrates that text messages did not originate from cellular phones but came from an automated telephone dialing system.”

Syed alleges that the campaign violated the Telephone Consumer Protection Act, which prohibits the use of automated dialers to send SMS messages to consumers without their permission. The law provides for damages starting at $500 per violation.

Judges across the country have reached different conclusions regarding the definition of “autodialer.”

A three-judge panel in the 9th Circuit Court of Appeals recently ruled that any device that stores telephone numbers to be called is an autodialer -- regardless of whether the numbers are generated by a random or sequential process.

But a different court -- the 3rd Circuit Court of Appeals -- came to the opposition conclusion several months ago. That court ruled that texting systems are only autodialers if they are capable of both generating and calling random (or sequential) numbers.

O'Rourke's campaign is not the only one to face allegations of robotexting. In 2016, the campaign of President Donald Trump apparently settled a similar lawsuit in Chicago. That matter appears to have been settled in late 2016, according to Politico.