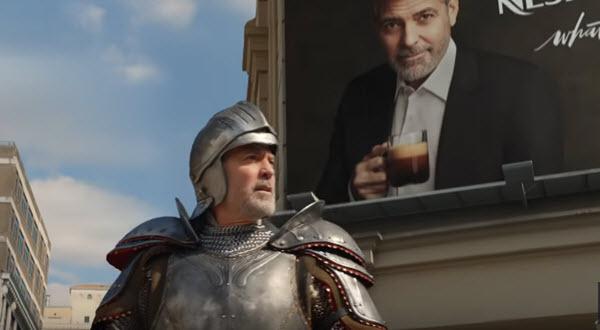 Nespresso is kicking off its largest global campaign to date with a new ad featuring its longtime brand rep George Clooney and “Game of Thrones” star Natalie Dormer.

The brand’s latest campaign from McCann will span more than 30 countries and television, digital, print, social media, out-of-home and Nespresso’s website and boutiques.

In the centerpiece 60-second spot, “The Quest” (below), Clooney is shown making a film, playing a knight to Dormer’s queen, who asks him what reward he wants for having saved the kingdom by slaying a dragon. In response, Clooney-as-knight suddenly breaks out of the screen and clomps down a movie aisle and onto the streets of New York City — in what turns out to be a quest for a café serving Nespresso.

The campaign seeks to go beyond mere entertainment and brand exposure, however, to highlight Nespresso’s commitment to sustainability.

For this purpose, its creative assets include a 30-second video, dubbed “Really, George?,” that features Nespresso employees involved at each stage of growing, producing and selling the coffee.

Their individual stories are also being told via video interviews on the brand’s website and social channels. "This is the first campaign in which Clooney, through the extended content, is shown interacting with Nespresso team members who 'strive to always deliver the best,'” pointed out Nespresso global CMO Alfonso Gonzalez.

Clooney, who has often expressed his opinions about societal and political issues, also stressed sustainability in remarks in the campaign release: "Younger generations are now very invested in recycling, and as a whole, we are much more aware of our consumption,” he said. “It's important for companies to drive innovation to safeguard our planet's future. Nespresso has really made it as easy as possible to recycle and I'm very happy and very proud to work for the company because of that."