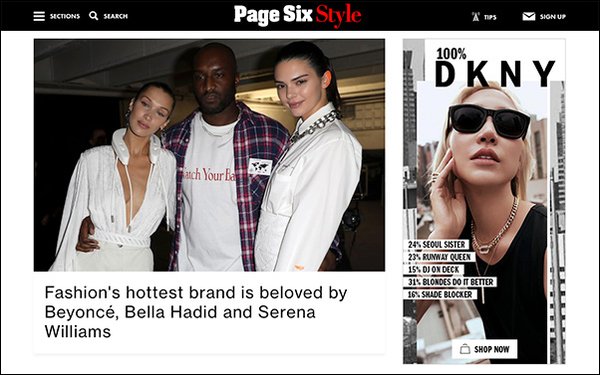 Page Six Style will explore “the trends taking Hollywood by storm in addition to offering exclusive interviews, curated shopping picks, breaking style news and more,” according to a company statement.

Unlike pure fashion-focused sites, Page Six Style will aim to cover celebrities and their style “holistically."

“If you look at people like Rihanna, Kendall Jenner,  there is so much of their celebrity that is mixed in with them as style icons,” Jesse Angelo, CEO-publisher of the New York Post and Post Digital Network, told Publishers Daily. “No one is looking at it holistically. Style is intrinsic to who this person is, and everything they do.”

New York Post Digital Network, which includes NYPost.com, PageSix.com and Decider.com, grew its reach by more than 500% since 2013, according to the company, citing comScore data.

The New York Post currently covers fashion and style; it has a fashion-focused supplement in the newspaper called Alexa, which is published more than 20 times a year.

“We at the Post have spent decades building ourselves into a destination for both consumers and advertisers interested in fashion retail and beauty,” Angelo said.

The Post Digital Network says there will be crossovers from its other brands.

“There may be a story that appears in the New York Post’s fashion pages of Alexa that appears online on Page Six Style, or vice versa,” Angelo said. “We are pretty fluid that way. We are not siloed.” Page Six Style content may also appear in features on “Page Six TV.”

The New York Post expanded its brand into television with its own syndicated TV show that debuted in 2017. It now airs in 98% of the country, according to the company.

“We have been leaning heavily into the Page Six brand,” Angelo said.

While the Page Six Style features on “Page Six TV" have not yet been hammered down, Angelo suggested they could look like branded segments.

Angelo told Publishers Daily they are in talks with existing fashion and retail advertisers about Page Six Style, which has “more integrations and opportunities for our advertising partners.” That means “more shoppable lists, more branded content opportunities and more places that can be seen as action points to buy beauty and fashion” products.

Page Six Style will be edited by Elana Fishman, who previously worked at Vox Media as entertainment editor of Racked.com - and PageSix.com's editorial director Maggie Coughlan.

The Page Six Style site launched with about 800 stories.

Angelo said Fishman and Coughlan are working with the Page Six team’s fashion and style reporters for the new, dedicated vertical.

"Celebrity fashion and red-carpet coverage has always been part of Page Six's DNA, making the launch of a style vertical a no-brainer," Fishman stated.

The Post Digital Network claims to reach 55 million readers a month in the U.S.