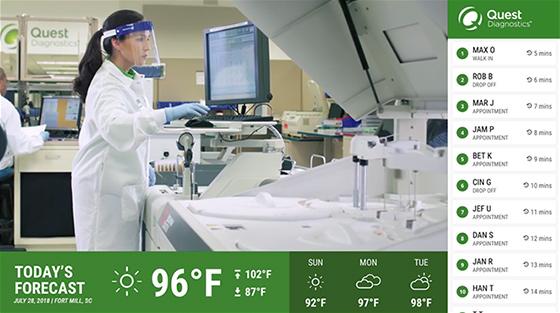 Quest Diagnostics is partnering with Mood Media to introduce "Quest TV," a curated, video programming network that is pre-recorded, with short-form and family-friendly content. The rollout includes more than 2,200 Quest Diagnostics waiting room lobbies in patient service centers across the U.S.

The network will run Quest-branded video content, including broadcast-ready commercials, around national video programming provided by Mood. Some content is updated daily and other video programs updated on a weekly/bi-weekly basis.

Under this model, Quest can select specific video content that is most relevant to their specific audiences. For example, Mood and Quest collectively determined that gameshow-type content is too noisy – with too many bells and whistles – as it tended to heighten the anxiety of waiting patients instead of lowering it, says Courtney.

Each month, Mood Media will deliver a content proof-of-play report that displays relevant media data such as frequency of content playback, duration in hours, minutes, and seconds, as well as sites where content aired.

"Others have attempted to create similar deployments but Mood's blend of fully licensed video content plus the ability for brands to completely customize and curate programming delivers an unmatched solution offering to the marketplace," says Courtney.